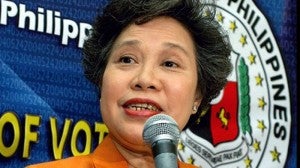 TIME was when “pick-up lines,” or the verbal moves that guys on the prowl used to get women they didn’t know to go on an instant date with them, were limited to a small number of predictable possibilities: “Hey, don’t I know you from somewhere?” “Excuse me, but were we classmates (neighbors, townmates) in grade school?” “Did anybody ever tell you that you’ve got beautiful eyes (or other delectable parts of the female anatomy)?” And the classic, “Ah, excuse me, what time is it?”

These days, however, those woefully tacky and “TH” gambits have been beefed up by literally hundreds of more “imaginative” and “witty” exchanges, similar in structure to the “knock-knock” jokes. Instead of “Who’s there?,” however, the respondent chimes in with “Bakit?”—as in “Kumain ka na ba ng asukal? (Bakit?) “Kasi, ang tamis ng ngiti mo!” (—Ngi!)

Now, we don’t know if these “new and improved” pick-up maneuvers have actually raised lotharios’ batting average when it comes to picking up strangers. Maybe they just get fewer outright snubs or slaps in the face, because women find them at least more entertaining than the terribly silly and even stupid verbal moves of yore? Well, at least that’s something.

The truth is, entertainment is very much at the heart of the new pick-up lines “trending” phenomenon, which has become so “in” that radio announcers now come up with lists of them, and ask their listeners to contribute their own, hopefully witty zingers.

In addition, Miriam Defensor-Santiago even dished out some of her own when she was interviewed by Sharon Cuneta on the Megastar’s new TV5 show (not that Maid Miriam ever picked up anyone!).

The latest sign that the new pick-up lines have really arrived is the fact that a movie titled “Boy Pick-up,” starring Ogie Alcasid, has opened in town. As the original pick-up guy on “Bubble Gang,” Ogie helped start the trend, so his movie comes as no surprise at all!

We hope, however, that the incipient trend won’t remain popular for very long, because it’s proven to have a very short shelf life—for the simple reason that most pick-up lines that all sorts  of people have been thinking up have been decidedly of very low wattage in terms of genuine wit.

Most pick-up lines are so heavy and obvious, not to mention shamelessly derivative, that just about all you could hope to pick up with them would be a monumental snub—or a couple of blackeyes!

That’s the way it is with flavors of the month or year in local show biz—they may be promising at the start, but everybody in this notoriously gaya-gaya nation quickly jumps on the trendy bandwagon, weighing it down with their increasingly less original and diverting variations and contributions—until the entire wagon collapses!

Having said which, however, we’d like to hopefully brighten your day a little by ending with our own compilation of pick-up lines. Enjoy—or groan—as the case may be:

“Are you a dictionary?—coz you add meaning to my life!”

“I’m not drunk— I’m just intoxicated by you.”

“If beauty were time—you’d be eternity!”

“Sorry, but you owe me a drink (Why?) Because when I looked at you, I dropped mine.”

“When I saw you, I thought I had died and gone to heaven—Now I see that I am very much alive—and heaven has been brought to me!”