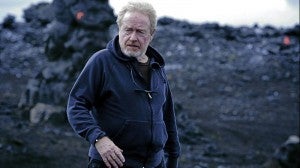 SCOTT. “What you learn from religion are the fundamentals of right and wrong.”

LOS ANGELES—Ridley Scott’s much-awaited film, “Prometheus,” asks questions about the origins of mankind. So, in a chat with the director, the conversation naturally turns to God, and such other topics as aliens and his new “Blade Runner” film.

“Prometheus,” which takes moviegoers on a voyage to investigate alien forms as it figures out who or what may have created mankind, is Ridley’s return to the science- fiction genre. He likes to bring up an anecdote about talking to a group of NASA scientists and how some admit that being religious can co-exist with their knowledge of math and quantum physics. Excerpts:

What is your vision of extraterrestrials?

I think extraterrestrials become logic rather than scientific because to look into the galaxy, to think that we’re the only life form sitting here, is ridiculous. There have to be a million forms of life out there.

I remember talking to Carl Sagan at the premiere of “Alien.” At the end of the movie, he said, “Hmm, the premise is entirely ridiculous, of course.” I said to him, “Lighten up, Carl, it’s only a movie.” But then, later on, he wrote a bloody good book called “Contact.” The book was really smart, because it ended 12 years before the aliens would arrive. So, the main character would have 12 years to prepare herself. I thought that was a really smart way of doing it. It also must have meant that deep down, Carl really believed that’s possible.

Why did you decide to revisit “Alien”?

You do it when the idea falls in place. I’ve been quite busy over the last 30 years doing other things, so I never really thought about it.

Maybe 20 years after having seen the “Alien” movies, I understand why the studio had to do them. And then that was the end of the bomb. That was it. Fizzle, fizzle, it went out. What had been playing in my mind—no one actually has questioned that one question that has always stayed in my mind. There’s a base of a film here that you can evolve a whole new thing. Of course, they said, “Why not?” So, we got into R&D (research and development), and here we are.

Can you talk about your next “Blade Runner” project?

“Blade Runner” won’t die. It refuses to die and yet, it was seen as a box-office failure when I made it. I was talking about it earlier. They asked, “Didn’t that bother you?” I said, “Not really.” What keeps me going is the fact that I have in me, without being pretentious at all, a bit of an artist—which makes it dangerous for me. In other words, it’s not always commercial. I may be ahead of the game or may be behind the ball.

But, I don’t think I’m really behind the ball. Maybe “Blade Runner” was ahead of the game. I think “Legend” was ahead of the game. It still runs now—but, at the time, it didn’t work. So, when you do “Pan’s Labyrinth” now, it gets Academy Awards. You’re circling the same thing I was doing 25 years ago. So now, I realize it’s an advantage. It has kept me going.

If you could have done “Alien” with the technology you had for “Prometheus,” what would you have done differently?

You’d probably see a little bit more of the alien. That’s all. I thought the alien was pretty good and the fact that you see less is better. Steven (Spielberg) did a great movie called “Jaws.” I’ve never been in the water since. And yet at the end, he stuck that big shark. I always thought, aww, you didn’t need to do that. In “Alien,” I was limited with what I could show. But frequently, limitations are better for you.

Are you a believer and what is your vision of heaven and hell?

My father made me an altar boy because we were with the Protestant Church of England. I’d go and struggle with the wine with the priest, who’d pour out this ruby-red wine. We’d have a struggle with the communion cup, because I liked the wine, as well.

I got fed up and eventually took up tennis instead of going to church. I became an avid tennis player. My parents never knew this for a year. My father said to me, “How can you do this?” I said, “Well, you don’t go to church and neither does mum.” There was this total silence.

But, the time I spent in church left a mark on me. I am not sure that the mark is a good thing, because it leaves an inherent sense of guilt even when you haven’t done anything wrong. Bizarrely, I still feel guilty. It keeps me on the straight and narrow path, so I think what you learn from religion are the fundamentals of right and wrong. Whether God or Christ has a part in that, the most important thing I got out of religion was right and wrong.

So, if you could ask your Creator, is there one burning question that you would want answered?

Yeah, what’s the weather like? I don’t know. Maybe if I can get my knee back, so I can play tennis again. The sport is a wonderful thing for me. It was my escape. But, my Maker? I wouldn’t know what to ask Him. I have pretty well everything. I’m really enjoying myself.