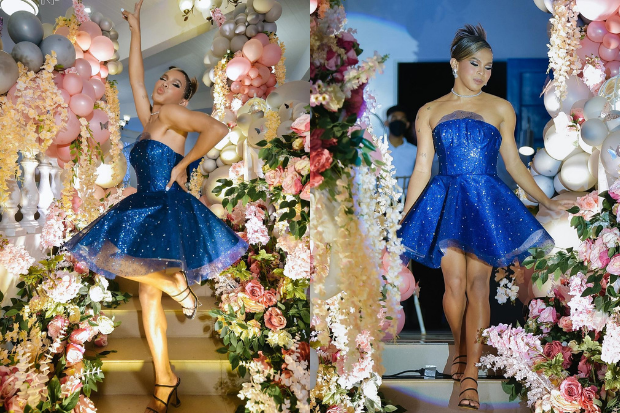 Awra Briguela has celebrated officially becoming an adult by enjoying a “Euphoria”-themed debut party for his 18th birthday.

The young comedian donned a blue strapless dress in his party, where he was surrounded by various flowers and balloons, as seen in a series of posts on his Instagram page yesterday, March 28. The event was held at Luljetta’s Hanging Gardens Spa in Antipolo and was photographed by Nice Print Photography.

Aside from flowers and balloons, the party venue also featured a neon blue, pink and purple backdrop with Briguela’s name bannered on it, and a pool filled with bubbles.

“Grateful for small things, big things and everything in between,” Briguela added in another post.

“‘Euphoria’-themed 18th birthday for @awrabriguela! Just [subtle] elements of the said theme, we still incorporated flowers and much more to make sure the ‘lady like vibe’ would be on point!” it stated.

“Euphoria”-themed celebrations have been trending on social media lately, given the success of the hit HBO Max series “Euphoria,” which features neon party scenes.

A post shared by Events By Miss P (@eventsbymissp)

A post shared by Events By Miss P (@eventsbymissp)

The young actor rose to fame for his role as Makmak in the action series “FPJ’s Ang Probinsyano” where he starred alongside Coco Martin. He was also named the champion of “Your Face Sounds Familiar: Kids” back in 2017.  /ra