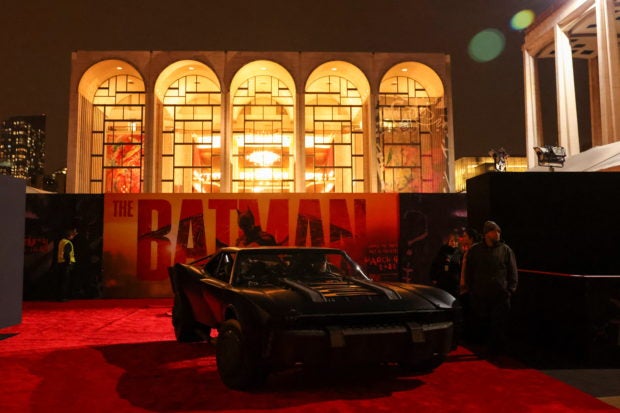 A “Batmobile” is seen on the red carpet during the New York Premiere of “The Batman” in New York City, U.S. March 1, 2022. Image: Reuters

LOS ANGELES — Robert Pattinson’s gritty superhero adventure “The Batman” is the no. 1 movie at the domestic box office for the third weekend in a row.

That feat is not surprising because March has been relatively light in terms of new releases. But even though there hasn’t been much competition, “The Batman” has managed impressive week-to-week holds. The movie collected $36.8 million from 4,302 theaters between Friday and Sunday, a 45% decline from last weekend.

Those ticket sales push “The Batman” past $300 million in North America, making the comic book adaptation only the second pandemic-era movie to cross that benchmark.

Two new movies opened nationwide, but Funimation’s manga adaptation “Jujutsu Kaisen 0: The Movie” and A24’s slasher thriller “X” did not pose a threat to “The Batman.”

In second place on domestic box office charts, the PG-13 “Jujutsu Kaisen 0” scored an impressive $17.6 million from 2,340 locations in its debut.

Anime films have been increasingly popular in North America, and Funimation, which recently rebranded as Crunchyroll and is mostly owned by Sony Pictures, has been at the forefront. Last spring, the film company opened “Demon Slayer the Movie: Mugen Train” to $21.2 million, a huge result at a time when cinemas were operating at reduced capacity.

“This is a terrific opening,” says David A. Gross, who runs the movie consulting firm Franchise Entertainment Research. “Reviews are exceptional for this and for all of Funimation/Crunchyroll movies. They have not missed.”

“X” landed in fourth place with $4.2 million from 2,865 venues, a quieter start given the loud praise after its South by Southwest premiere.

However, Gross points out, “Horror is not expensive to make — clever cinematography, editing and sound design go a very long way. ‘X’ should recover its costs and make a few dollars after all ancillary money is counted.”

Ti West wrote and directed “X,” which follows actors making an adult film in rural Texas. But once their reclusive hosts, an elderly couple, catches the guests in the act, things get messy.

Variety‘s chief film critic Owen Gleiberman promises that “X” will “earn your fear.” He calls the movie “a deliberate, loving, and meticulous homage that isn’t simply trying to cash in on the legacy of the greatest horror film of the last half century.”

Channing Tatum’s canine adventure “Dog” took the no. 5 spot, pushing “Spider-Man: No Way Home” out of the top five for the first time in 14 weeks.

“Dog” lapped up $4 million from 3,307 locations, bringing the film’s North American total to $54 million. It’s a great result for MGM’s road-trip buddy comedy, which cost only $15 million to make. And it’s encouraging evidence that studios can still make non-superhero movies that turn a profit, as long as budgets don’t get out of hand.

And “Spider-Man: No Way Home,” even after three and a half months on the big screen, was no slouch, pulling in $3.2 million from 2,585 screens.

After this weekend, the comic book epic has generated $797.56 million at the domestic box office. It’s only a stones throw from becoming the third movie in history to cross $800 million in North America following “Avengers: Endgame” ($858 million) and “Star Wars: The Force Awakens” ($936 million). GSG/JB