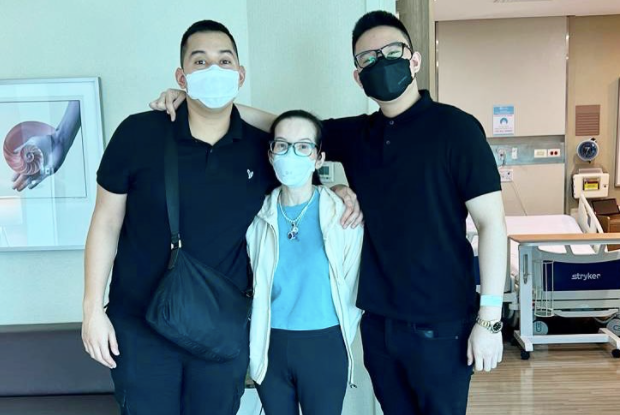 Kris Aquino with her sons Josh and Bimby (Image: Instagram/@krisaquino)

Kris Aquino has come home with her sons Josh and Bimby after going through several medical tests and treatments over the past weeks.

The actress revealed she is now at home while showing herself with Josh and Bimby outside what appears to be a hospital room, as seen on her Instagram page yesterday, March 14.

“Nakauwi na kami (We’re home) this was our last [picture] before heading to our temporary, leased home. Maghihintay na lang (Just waiting) for my bone marrow test results. Super blessed to have the love and concern from these [two] giants,” she said, referring to her sons. “[Through] them binigay ni God (God gave) so much more than I could ever deserve.”

Aquino underwent a bone marrow aspiration so a blood-related disorder may be ruled out. She also underwent scans and no tumors were detected in her body.

She was diagnosed with erosive gastritis and gastric ulcer, while her heart was deemed “in good shape and healthy working order.” She also recently took the second dose of her Xolair injection, almost two weeks after her first dose.

Aquino’s fellow celebrities Angel Locsin, Angeline Quinto, Camille Prats, Pokwang and Jackie Lou Blanco were among those who wished for her full recovery.

The Queen of All Media disclosed that she was diagnosed with the autoimmune disease chronic spontaneous urticaria in 2018. She has since been updating the public about her condition and its symptoms including weight loss.

Aquino was recently cleared of cancer and diabetes; she also underwent a test to see if she is viable for treatment abroad. Last January, she shut down rumors that she was in critical condition, stressing that she would “fight to extend [her] time.”  /ra