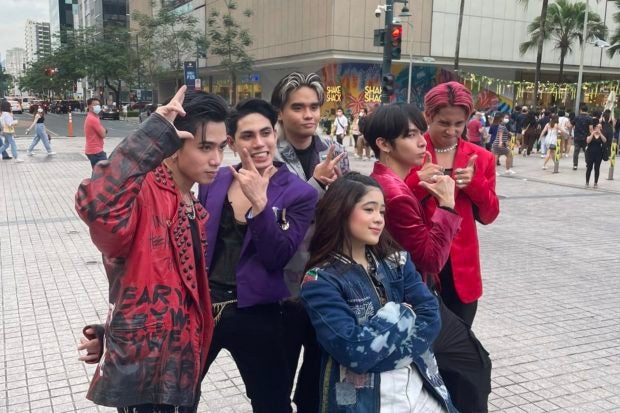 SB19 and TikTok star vlogger Niana Guerrero may be working on a collaborative project dropping soon as they were spotted dancing together at a crosswalk.

Guerrero appeared to have hinted at her upcoming project with the P-pop group while showing herself with them at Bonifacio Global City, as seen on her Twitter page yesterday, March 11.

The TikTok star only stated that she will be in a new video with the group and did not give further details about the project. Despite this, fans are speculating that their collaboration would likely be related to dance, given that Guerrero is known for her dance videos.

Several of SB19’s fans, referred to as A’TIN, spotted the group with Guerrero while they were dancing to their hit song “Bazinga” at a crosswalk, as shown by one @sexydilis on Twitter yesterday.

Aside from the crosswalk performance, Guerrero also featured SB19 on her TikTok video today, March 12. This led fans to express excitement and hope that the group will release a dance video for “Bazinga” with Guerrero.

“If ever they upload that on Niana’s [YouTube] channel, so many casuals will see and get to know SB19 not only in the Philippines but also [internationally],” one @MaryJoy74213712 pointed out.

If ever they upload that on Niana's yt channel, so many casuals will see and get to know #SB19 not only in the Philippines but also international. niana yt followers is more than 14million..

“Ranz and Niana (and Natalia) with SB19. The dance collab we never thought we need [please],” another netizen, @ber_suson said, referring to Guerrero’s siblings who also appear in her dance videos.

Last January, “Bazinga” took the top spot on the Billboard Hot Trending Songs digital chart for seven weeks, taking over the six-week record of BTS’s song “Butter.” This makes SB19 the record-holder for the longest streak on the digital chart.  /ra