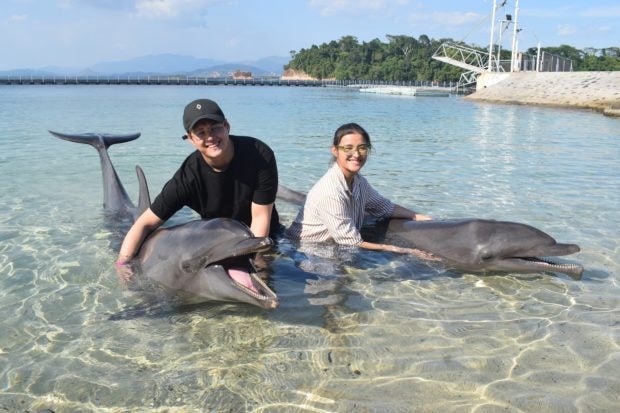 Liza Soberano and Enrique Gil got to experience a day with the dolphins during their recent marine-themed date at Subic Bay.

The couple, known as the love team LizQuen, took a dip in the water as they hugged, bonded with and received kisses from dolphins, as seen on the Facebook page of marine theme park Ocean Adventure Subic Bay today, March 8.

“[On] behalf of our dolphin Friends, we would like to thank you [miss] Liza Soberano [and mister] Enrique Gil for your visit!” it stated.

In behalf of our Dolphin Friends, we would like to thank you Ms. Liza Soberano & Mr. Enrique Gil for your visit! Come…

Soberano and Gil appeared to be enjoying their time in Subic as the actress recently showed herself with Gil at Triboa Bay Country Club in Subic Bay, via her Instagram page last Saturday, March 5.

“You make my heart smile,” she said.

Soberano and Gil have been in a relationship since 2014 but opted not to reveal they are together until 2019. They celebrated their seventh anniversary in October 2021 with a romantic getaway in Batangas.

The actor also accompanied Soberano when she flew out of the country to visit her great-grandmother in the United States last Christmas.

Soberano and Gil have been paired in various movies and TV projects including “Forevermore,” “Alone/Together” and “My Ex and Whys.”  /ra