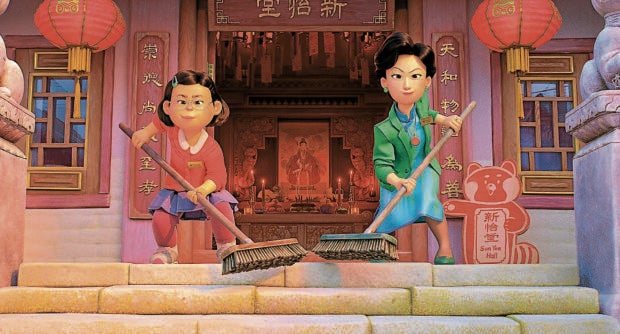 Why is there a big red panda running around with three culturally diverse middle schoolers in Disney/Pixar’s groundbreaking latest film “Turning Red”? The answer to that valid question is less fantastical than it seems.

In fact, “Turning Red,” which opens in Philippine cinemas on Thursday, is a semiautobiographical story, conceptualized and directed by Oscar winner Domee Shi (“Bao”), the first woman of color—and only the second female overall (after “Brave’s” Brenda Chapman)—to direct a Pixar movie.

It follows 13-year-old Chinese-Canadian girl Meilin Lee (voiced by Rosalie Chiang), an overachieving Grade 8 student who transmogrifies into an oversized red panda every time she gets excited or agitated.

As with all of us, who went through alternately exciting and frightening changes the moment puberty beckoned, Rosalie comes of age surrounded by the sturdiest support group any tweener could hope for.

On one side, there’s her all-knowing “hypervigilant” mom Ming (Sandra Oh, excellent in her depiction of a doting “tiger” mom), and on the other, her three bosom buddies, made up of her best friend Miriam (Ava Morse), the perpetually deadpan Priya (Maitreyi Ramakrishnan) and the overly excitable Abby (Hyein Park).

They don’t just help get Mei-Mei through the toughest of times (and we’re not just talking about menarche) but also rally behind her through moments of heartwarming triumphs and simple joys, like when they swoon over the five-member boy band Four Square, who performs songs specifically written for the film by hot-to-trot musical siblings Billie Eilish and Finneas. 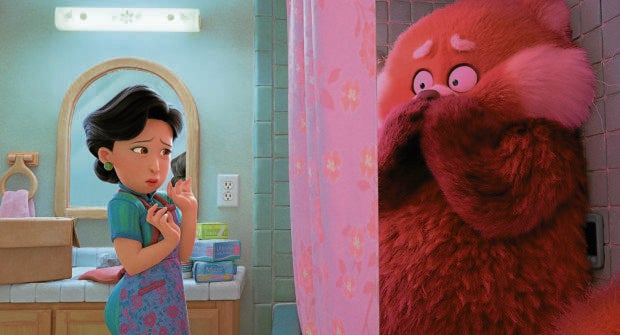 Later in the week, we will talk about the film’s merits and let its artistic team—that’s director Shi, producer Lindsey Collins, writer Julia Cho and animators Patty Kihm and Aaron Hartline—discuss in a series of exclusive interviews how they built “Turning Red” from the ground up.

There are moments in the film that are at once culturally specific and universal at the same time, Sandra said during the press conference that Inquirer Entertainment attended last week: “The thing that grabbed me to this film is its focus on the inner life of a 13-year-old girl as she explores a tender and fraught time with her mother—it’s something that we all can relate to.

“And I just love the characters so much! They’re not afraid to be smart … they’re not afraid to like their work. They’re extremely entrepreneurial in this way, and they have their eyes on the prize—which is, they want to see Four Town. And with the help of Panda, they make it happen!

“I also appreciated how all these girls, even in their young womanhood, are in charge of their lives and making their own decisions.” 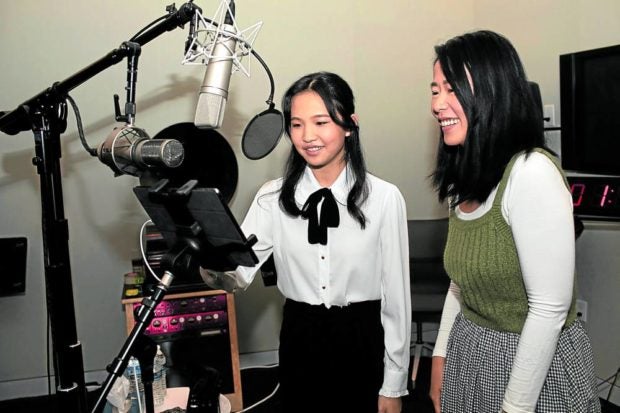 More than that, Sandra was drawn to its accurate depiction of friendship forged over time.

“Unlike Rosalie and the other girls, I’m well into my midlife,” said the 50-year-old SAG- and Golden Globe-winning actress (“Killing Eve,” “Grey’s Anatomy,” “The Chair”). “I actually met my best friend in third grade, [inspirational speaker] Margo Purcell. I have relationships and friendships that are 40 years old.

“When you’re young, it’s precious time when you’re starting to figure out who you are, and that’s when your friends become really important. So, I’m still friends with the girls I grew up with in Nepean, Ontario.”

For Rosalie, who has been attached to the project for four years, the movie’s similarities to her life went beyond its relatable metaphor on growing up. She disclosed, “After watching the movie, my mom and I looked at each other and said, ‘Oh, this is really similar. There are so many odd and weird coincidences.

“First of all, my mom’s middle name is Ming—there’s no way they could have known that. Also, my favorite animal before this whole project even started has always been the red panda. And creepiest of all, my mom actually calls me Mei-Mei, which means ‘little sister’ in Chinese.

But while growing up can indeed be stressful, it’s something that Ava pointed out isn’t without its lure. “I’m currently a high school student, and everybody is just growing and changing together. It can be stressful and dark at times—which isn’t something everyone knows how to handle well.

“At the same time, it’s a beautiful thing … because everybody’s in it together and just puts it all into living their lives the best way they can.”

For her part, Hyein singled out another aspect of the film that struck a chord with her.

“Teenage female friendships are often portrayed as catty or ‘backstabby’—and ‘Turning Red’ totally rejects these tropes,” she pointed out. “Those tropes are wrong! That wasn’t my experience. But then, people started behaving like those characters, because that’s what we always see.”

Our Q&A with Sandra, Rosalie, Ava, Maitreyi and Hyein:

With “Turning Red,” Disney/Pixar has created very distinct roles for voice actors, each as compellingly realized as the other. How would you describe your character?

Ava: I’m the voice of Miriam, the best friend that you could ever want. She’s funny and is always there for you. She’s also a party animal. And she always knows how to cheer you up when you’re down.

Maitreyi: Priya is pretty sarcastic … very dry and deadpan. But you know what? I think she’s one cool cat. And she’s down to clown around, but always with attitude.

Hyein: Abby is like this little ball of energy. She’s very loving and passionate, but comes up a little too explosive. But I would say she loves her friends so much, especially when they’re fluffy.

Sandra: I play Ming, Mei’s mom. I like to call her a hypervigilant, loving mother. Mei and I basically go through this shift in our relationship. Natural change occurs between mothers and daughters when daughters have to become their own independent people, and this is tough on me as Mei’s mother.

Rosalie: Meilin is a 13-year-old Chinese-Canadian who’s confident, ambitious and a little dorky [because] she’s a bit of an overachiever. But she puts so much value in her friendships and her relationship with her mom. In this movie, she goes through these huge changes but, at the same time, she doesn’t want to lose herself as well.

Let’s talk about Four Town and the allure of boy bands, which are experiencing a resurgence these days. Can you share with us moments that stick outs to you, where you’re kind of fangirling over bands?

Maitreyi: I remember going into Grade 9 in the summer, I went to my first concert to see [the pop-rock band] Marianas Trench—and I lost my mind (laughs)! Before that, I was always wondering why people cry at concerts, like, shouldn’t you be happy or smiling to be there instead?

But as soon as they came out onstage, I began bawling and got so emotional! Now I understand why—and it just made sense. Again, the importance of music growing up cannot be underestimated, because it can totally shape who you are.

Hyein: In my case, I’m actually an old millennial. I migrated to Canada right about that age when people would start having boyfriends. I work as a story artist at Pixar now, but back then, I was just busy learning the language. So, I lost out on it. 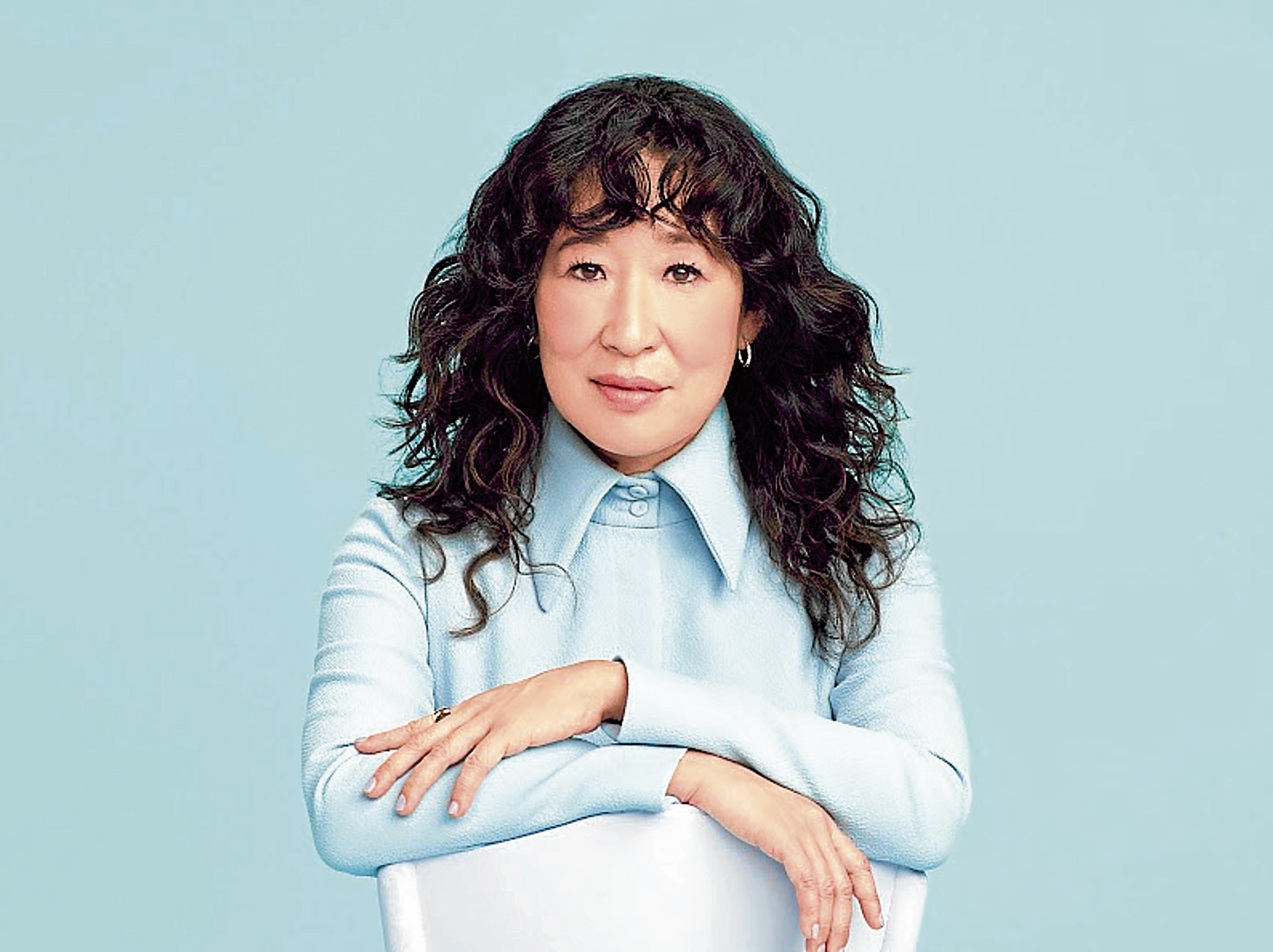 For Sandra, have you experienced your own ‘tiger mom’ moment when you were younger? Does that still linger in your memory today?

Sandra: My whole life! I’m also not afraid of that concept of a tiger mom. I mean, I love my mom, who’s a fierce, fierce person. She’s tiny but fierce. You know, I actually do have something that I posted a very long time ago on Instagram.

Because it was such an unbelievable quote that my mom said in the kitchen, I had to write it down on post-it, then put it up on Instagram. Basically, she said—and I’m not joking—“If only you were neater, I would love you more.”

While I know that not everyone does, I have a really good relationship with my mom. But I also know that I can’t stop her from being herself—and I won’t! So, I’m just going to enjoy that and do what I can, because I can’t be who I’m not. I think Asian mothers are just very, very difficult to satisfy.