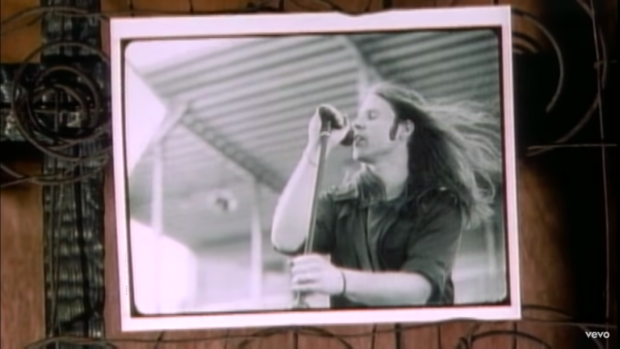 Mark Lanegan. Image: screengrab from official video of “Nearly Lost You” via YouTube/ScreamingTreesVEVO

The statement posted on the artist’s official Twitter account did not specify a cause of death, though Lanegan reportedly was suffering from COVID-19 and kidney disease last year.

The singer with uniquely scratchy vocals was born Nov. 25, 1964 in Ellensburg, Washington. He made a name for himself in the late 1980s and early 1990s with the band Screaming Trees, a forerunner of the grunge movement that would come to define the American northwest.

Our beloved friend Mark Lanegan passed away this morning at his home in Killarney, Ireland.  A beloved singer, songwriter, author and musician he was 57 and is survived by his wife Shelley.  No other information is available at this time. We ask Please respect the family privacy

The closest the band came to mainstream success was with the album “Sweet Oblivion,” which included their biggest hit “Nearly Lost You” and sold some 300,000 copies.

The band split in 2000, after which Lanegan began a solo career and did vocal features for bands including Queens of the Stone Age.

The artist was open about his struggles with drugs and alcohol, which he wrote in his 2020 memoir left him at periods experiencing homelessness.

He was sober in the final decades of his life, after receiving help from the Musicians Assistance Program. He lived with his wife, Shelley Brien, who survives him.

“I wanted excitement, adventure, decadence, depravity, anything, everything,” the artist wrote in the memoir, entitled “Sing Backwards and Weep.”

“I would never find any of it in this dusty, isolated cow town. If the band could get me out, could get me into that life I so craved, it was worth any indignity, any hardship, any torture.” JB