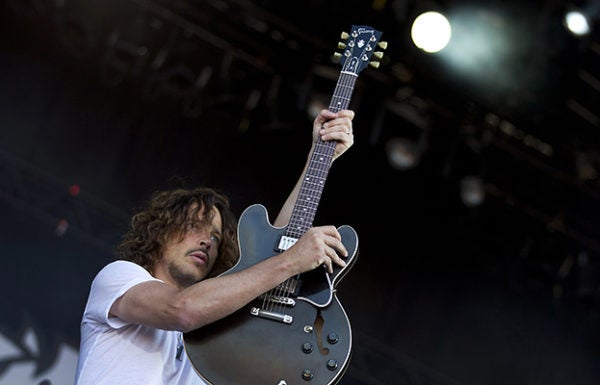 Cornell, 52, was found hanging in his hotel room in Detroit early on May 18 after a show with his main band Soundgarden. The medical examiner called the death a suicide. Image: AFP/ANP/Paul Bergen

Pearl Jam frontman Eddie Vedder on Tuesday mourned grunge icon Chris Cornell as someone like a brother to him, breaking a nearly three-week silence that had irked the late singer’s family.

The death of Cornell, who had been an early mentor to Vedder, left Pearl Jam as the last surviving titans of the grunge rock scene that burst out of Seattle in the early 1990s.

Vedder, in an on-stage speech during a show in London, said he had been reflecting on Cornell’s death, adding, “these things take time.”

“You know, he wasn’t just a friend. He was someone I looked up to like my older brother,” Vedder said in remarks quoted by several spectators on a Pearl Jam fan forum.

Vedder said he had lain awake two days after Cornell’s death in a waterfront cabin, “a place he would have loved,” and memories came back.

Cornell, 52, was found hanging in his hotel room in Detroit early on May 18 after a show with his main band Soundgarden. The medical examiner called the death a suicide.

Cornell’s wife disputed the finding, saying the singer, who had recovered a decade earlier from longtime drug and alcohol problems, had shown no suicidal inclinations and that his judgment may have been impaired by an anti-anxiety prescription drug.

Two days afterward, Pearl Jam posted a picture of Cornell on Facebook but did not issue a statement.

“Who’s not man enough not to pay a tribute to the man who gave him a chance to be who he is????? To not send a message to his wife and 3 kids,” she tweeted, not using Vedder’s name but pointedly saying the person sang “Daughter.”

Vedder met Cornell when the future Pearl Jam singer arrived in Seattle to join the growing scene of grunge, the musical subgenre that merged the rawness of punk rock with dark introspection.

Vedder’s first-ever recording was in 1991 when Cornell included him on “Hunger Strike” by Temple of the Dog, which featured musicians who would form Pearl Jam.

Of other emblematic singers of grunge, Kurt Cobain of Nirvana killed himself with a shotgun in 1994, while Andrew Wood of Mother Love Bone (1990) and Layne Staley of Alice In Chains (2002) both died from a drug overdose. Stone Temple Pilots frontman Scott Weiland also died of a drug overdose in 2015. JB