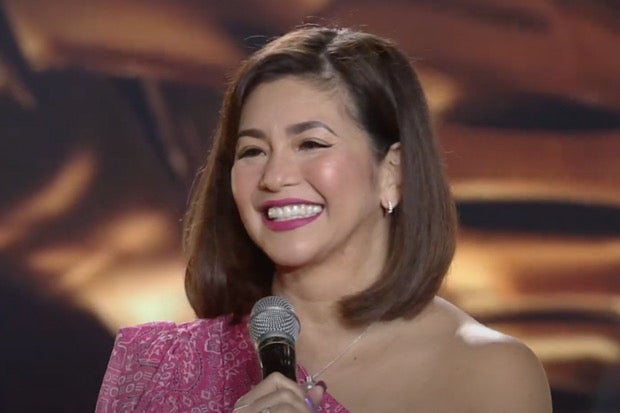 Regine Velasquez seems not to be giving up on her sexy star dreams, expressing in jest her interest for sexy roles during her contract renewal with ABS-CBN Network.

Velasquez spoke about how she values the opportunities she was given which allow her to serve her purpose and give joy through singing. She talked about this in the recently held “Kapamilya Strong 2022” contract signing event, as seen on Star Magic’s YouTube channel yesterday, Feb. 23.

(I like what ABS-CBN sees on singers like what we do in Kumu, some might think that it’s just not a big deal but we actually help a lot of people doing that. Also, as they say, “Music heals the soul” – that’s what really happened to me during the pandemic. Maybe if I wasn’t able to sing, if I didn’t have ASAP which I look forward to every Sunday, I might have succumbed to depression.)

Aside from continuing her music career, Asia’s Songbird jokingly asked her bosses for daring roles, adding that it’s her dream to be a “sexy star.” ABS-CBN president Carlo Katigbak, who was beside the singer during the signing, then jokingly wrote something on her contract, as if implying that her request is already granted.

“Thank you to ABS-CBN for giving me this opportunity to be able to sing again and do the thing that I love the most. Dito kasi sa ABS-CBN, napakalaki ng importansya na binibigay nila sa singers and I’m hoping na one day mabigyan nila ako ng pagkakataong maging sexy star,” she stated.

(Here in ABS-CBN, they give much importance to singers and I’m hoping that one day they would give me a chance to be a sexy star.)

Velasquez was overwhelmed with joy after she was presented with a compilation of messages from her fellow Kapamilya artists. She then thanked her bosses and stressed how proud she is to be part of the “Kapamilya circle.”

Other celebrities who also signed their contracts with the network were Gary Valenciano, Jolina Magdangal and Gerald Anderson, among others. The event also marked the start of Star Magic’s 30th anniversary festivities. JB