Love in the time of corona in focus at Berlin fest 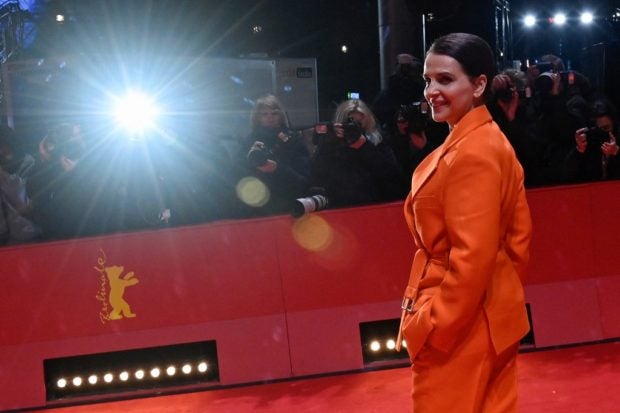 French actress Juliette Binoche poses on the red carpet for the film “Avec amour et acharnement” (“Both Sides of the Blade”) by French director Claire Denis shown in competition during the 72nd Berlinale Film Festival in Berlin on Feb. 12, 2022. Image: AFP/John Macdougall

The Berlin Film Festival has delivered on a promise of “crazy, intoxicating” love stories at its 72nd edition with diverse movies exploring infatuation and loss around the pandemic-racked world.

In time for Valentine’s Day, Europe’s first major cinema showcase of the year has rolled out a program telling the kind of intimate tales perfectly suited to lockdown-era filmmaking.

The two play Sara and Jean, a Parisian couple who become ensnared in a love triangle when her former boyfriend resurfaces as Jean’s new business partner.

Although Sara and Jean still share deep love and an active sex life, she starts to find his presence suffocating — not least while cooped up due to COVID-19 — and begins meeting her ex for secret trysts.

“When you are yourself torn between a past and a present or between two loves, this impossibility to go back once desire is set in motion — that’s a complex situation,” Binoche told AFP. “There is no right or wrong solution… you just have to get through it as dignified and honestly as possible.”

Younger men awakening passion in older women takes centerstage in “A E I O U – A Quick Alphabet of Love,” starring Austrian theater star Sophie Rois, and “Good Luck to You, Leo Grande” with Emma Thompson.

While Rois tutors a purse snatcher who ends up seducing her during diction lessons in her flat, Thompson’s widow character seeks instruction from a charming sex worker, having never had an orgasm in her long marriage.

The British actress said the comedy, which was rapturously received at its live premiere after screening online at Sundance last month, felt radical because it showed an aging woman shedding “shame” about her body.

“I don’t think that female pleasure’s ever been at the top of the list of things that the world wants to make sure (women) have,” she told reporters. “I think if you went into the British countryside and the German countryside and the French countryside and asked all the old ladies who were sitting on their stoops in the sun, ‘How many orgasms have you had?’ you’d be surprised.”

In one of the festival’s highlight performances, French actor Denis Menochet in “Peter von Kant” plays a successful director waylaid by his passion for a capricious young actor.

“I was trying to bring out the suffering of Peter von Kant –- he’s not very lovable until you see him suffering,” he said.

Tragic loss has also preoccupied many of the world’s directors during the pandemic, with the tender Chinese drama “Return to Dust” and “A Piece of Sky,” set in majestic Alpine vistas, moving Berlin audiences to tears.

Chinese director Li Ruijun, 39, tells the tale of Cao, the timid fourth son of a rural family, and the disabled Ma, who are cast off by their clans and pushed into an arranged marriage.

Despite their isolation and grinding poverty in remote Gansu province, an unexpected love blossoms between them.

Li, unable to attend the festival due to coronavirus restrictions, wrote that he wanted to tell a story of “eternal love, against the odds.”

“A Piece of Sky” shows a young waitress and a farmhand who stay devoted to each other even as his personality changes drastically due to a brain tumor.

Their battle with illness plays out against the backdrop of stunning mountain landscapes, something Swiss director Michael Koch said reminded people that much in life is beyond their control.

“From time to time nature reveals its destructive potential and anyone who grows up in the mountains has an awareness that in the end nature is always stronger than you,” Koch, also 39, told AFP.

He said love, too, had a way of reminding people of their powerlessness.

“Love is bigger than you and if you have it, it’s so strong that [it] doesn’t matter what happens, it will remain,” he added. DC/JB

One year after Bataclan: Berlinale film explores the aftermath of terror