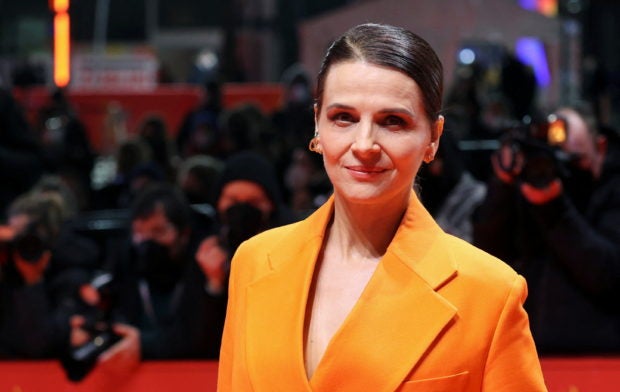 BERLIN — They’ve been together for years, their marriage is harmonious and fulfilling. She is successful, he is content. Until one day an ex appears and everything is destroyed in an instant.

The premise of “Both Sides of the Blade,” which premiered at the Berlin Film Festival on Saturday, may not be entirely original, but for director Claire Denis, her film is distinguished by its adult, unflinching approach to a menage-a-trois and a refusal to apportion blame.

Juliette Binoche plays Sara, an accomplished radio journalist whose life with retired rugby player Jean (Vincent Lindon) is complete. While she interviews the world’s oppressed for her show, he potters happily and does the shopping.

In the evenings they return to their beloved flat on Paris’s Rue d’Amsterdam, a welcoming space that suddenly turns close and oppressive when Francois (Gregoire Colin) reappears in their lives.

As sly and intriguing as Jean is open and gentle, Francois is Sara’s former lover, and the two men are also former friends and business partners. Soon, the protagonists start leaving the room to take hushed phone calls.

Denis said filming this part of the film took a psychological toll, the crew shattered after filming Sara and Jean’s final row.

But, according to Binoche, it is crucial not to cast that sudden change as a failure of the marriage. Rather, she said, the film says this needs to be acknowledged as a reality.

“You’re obsessed by him, by this person, you are your needs of having him inside you as a woman, it becomes like a need that is so big,” she said. “There’s nothing psychological about it. It’s visceral.” JB

Read Next
How to be a TikTok music megastar
EDITORS' PICK
EDITORIAL: To a bike-friendly future
The Best Tech Gifts For The 2022 Holidays
Pagasa: Warm, sunny Sunday in most parts of PH
House energy committee chair Arroyo bats for cheap electricity
Is it safe to talk politics again at family gatherings? ‘The Reconciliation Dinner’ shows us what that’s like
vivo’s coming to town to grant wishes with more holiday promos
MOST READ
LOOK: Vhong Navarro transferred to BJMP detention facility in Taguig
The Elephant Man in the Senate
Posh village as ‘shabu’ haven
LOOK: Zanjoe Marudo bonds with Ria Atayde, her family
Don't miss out on the latest news and information.