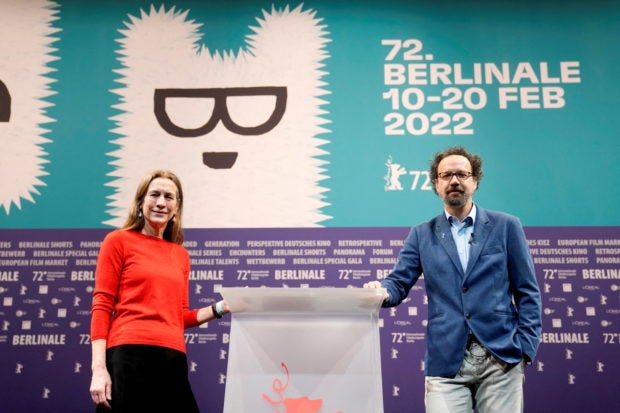 The artistic director Carlo Chatrian, right, and managing director Mariette Rissenbeek, of the International Berlin Film Festival Berlinale pose for photographers during a media event, prior to the official program presentation for the festival, in Berlin, Germany, Wednesday, Jan. 19, 2022. Image: Reuters/Markus Schreiber/pool

BERLIN — The theme of love dominates the main competition entries at this year’s Berlin Film Festival, in a shift away from hard-hitting, political dramas the annual cinema showcase is best known for.

Live screenings will resume in 2022 after last year’s online-only version, in an event artistic director Carlo Chatrian hoped would restore the social bonds that two years of lockdowns and isolation have weakened.

“Never before have we seen and welcomed so many love stories as this year: crazy, improbable, unexpected and intoxicating love,” Chatrian said, unveiling this year’s competition lineup.

Eighteen films will compete for the Golden Bear for best picture in a slimmed-down competition that includes French director Claire Denis’ “Both Sides of the Blade,” casting Juliette Binoche in a pandemic-time love triangle.

“Seeing a film in a theatre, being able to hear breathing, laughter or whispers next to you (even with correct social distancing), contributes in a vital way not only to the viewing pleasure but also to strengthening the social function that cinema has, and must continue to have,” Chatrian added.

Founded in 1951 in a divided city that straddled the frontlines of the Cold War, the Berlinale is often the most political of the major film festivals, and the 72nd edition, which runs from Feb. 10 to 20, preserves some of that spirit.

Even as the United States Supreme Court hears cases that could limit the right to abortion, Phyllis Nagy’s “Call Jane,” starring Elizabeth Banks, Sigourney Weaver and Kate Mara, is set in the 1960s at a time when abortion was illegal in the country.

France’s Francois Ozon returns to the festival with “Peter von Kant,” a retelling of Rainer Werner Fassbinder’s 1972 study of love, rage and possessiveness, while Isabelle Huppert, who wins a lifetime achievement award this year, stars in Laurent Lariviere’s “About Joan.”

Other premieres include Peter Flinth’s “Against the Ice” and “Dark Glasses” by Dario Argento, the Italian director best known for the lurid 1977 cult horror film “Suspiria.” JB

Read Next
SB19 retains no. 1 spot on Billboard Hot Trending Songs for six weeks
EDITORS' PICK
Geek out at TOYCON 2022 powered by Smart Signature
House energy committee chair Arroyo bats for cheap electricity
UK’s Boris Johnson will resign, BBC reports
High inflation: Your P1 is now worth only 87 centavos
Unemployment rate up to 6% in May
High-risk pregnancy: Reducing your risk is in your hands
MOST READ
Suspect in grisly killing of missing woman in Bulacan arrested
Kim Atienza’s daughter flaunts bikini body in response to critics of her ‘revealing photos’
Japanese artist who created ‘Yu-Gi-Oh!’ found dead in the sea
FDA probes popular Filipino noodle brand for ‘high level of ethylene oxide’
Don't miss out on the latest news and information.