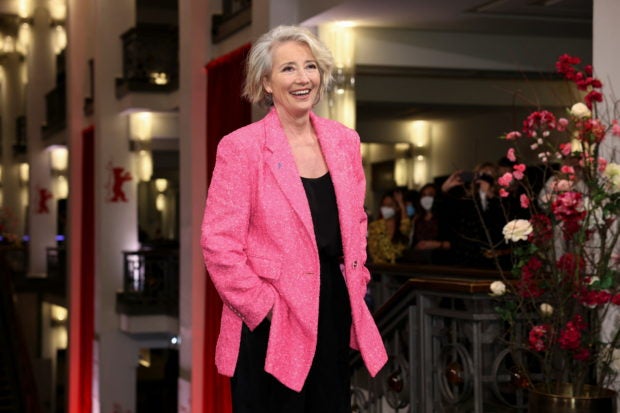 BERLIN — British actress Emma Thompson takes on the role of an inexperienced teacher getting a sex education from a young male escort in the Berlinale entry “Good Luck to You, Leo Grande.”

The film tells the story of retired religious studies teacher and widower, Nancy Stokes (Thompson), who after much deliberation has decided to book a hotel room and hire sex worker Leo Grande (Irish actor Daryl McCormack) for the night. As their initially awkward encounter progresses, the two begin to open up about their lives to one another.

“I loved this script so much and I loved its examination of the female experience,” Thompson said as she attended the film’s red carpet premiere.

“We’ve really got to tell these stories and draw them out and make sure that they get made because it’s not a given,” she said.

The performance-focused film is set almost entirely in one hotel room, where Nancy and Leo bare their souls and their bodies to each other.

Directed by Australian filmmaker Sophie Hyde and written by British comedian Katy Brand, the movie explores themes of sexuality, self-expression and body positivity through humor and candor. A scene features Thompson, 62, scrutinizing her naked body in front of a full-length mirror.

“I think it was a very difficult scene for her to do because for any of us to stand and to look at ourselves in the mirror without judgement and without trying to change ourselves is a big thing because we’re soaked in a culture where we’re taught to hate ourselves and hate our bodies,” said Hyde.

“Good Luck to You, Leo Grande” received its world premiere at the virtual Sundance Film Festival and is screening in the Berlinale Special Gala section in Berlin. JB