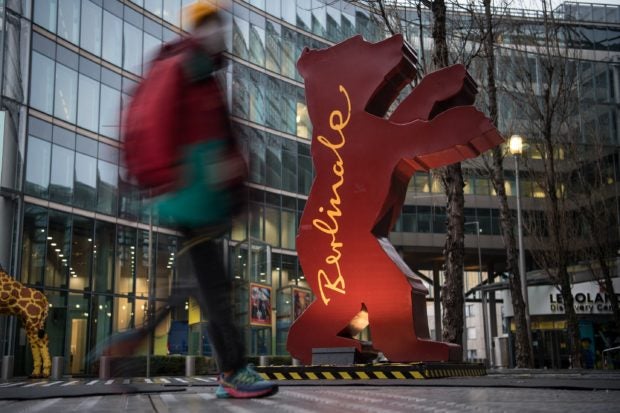 A gender-swapped update of a German cult classic on Thursday opened the Berlinale, Europe’s first major international film festival of the year, which organizers are staging as a live event despite surging coronavirus infections.

It is one of 18 films from 15 countries vying for the Golden Bear top prize, which will be awarded Wednesday from a jury led by Indian-born American director M. Night Shyamalan (“The Sixth Sense”).

Ozon, 54, one of the leading lights of European gay-themed cinema, said the love triangle set in the claustrophobic atmosphere of the title character’s sumptuously decorated home was the perfect pandemic project.

“It was during the French lockdown when all French directors wondered whether they’d be able to continue working” that the idea was born, he told reporters.

He and his small cast of actors including Denis Menochet, Isabelle Adjani and Hanna Schygulla, now 78, who played the cruel young seductress in the original, hunkered down together for rehearsals and filming.

Calling himself a “Fassbinder fetishist,” Ozon said the German director had told an autobiographical story about love and dominance but “hidden” behind a female character in the then daring lesbian romance.

Ozon said he decided to transform the title character from a woman fashion designer to a male film director who falls hard for a young actor to probe his own life and work.

“There’s something universal about dominant relationships,” he said, noting that the question of who had the upper hand was “not binary” and often evolves over time.

“But a director has to ask himself how he deals with his power. So I used this text to ask these questions of myself and the audience.”

Menochet, also co-starred in Ozon’s “By the Grace of God” about pedophilia victims in the Catholic Church, which won the Berlinale’s runner-up prize in 2019.

While Fassbinder was notoriously tyrannical on set, Menochet said Ozon was firm but not unfair.

“He’s impatient, like a ship’s captain,” he said with a smile.

Berlin ranks with Cannes and Venice among Europe’s biggest film festivals and prides itself on being most welcoming to the general public, selling thousands of tickets to red-carpet premieres and screenings across the city.

This time, organizers of the Berlinale, which started in 1951 as a Cold War culture showcase for the divided German capital, have imposed a raft of precautions to audiences safe.

Shyamalan told reporters he was “just so excited to watch these movies.”

“I’m feeling like a kid here and these guys are the perfect partners in crime,” he said.

The jury also includes Japan’s Ryusuke Hamaguchi, whose “Drive My Car” is now nominated for four Oscars, and Tunisian-French producer Said Ben Said, who praised the decision to go ahead with the festival.

Last year, the Berlinale competition was staged strictly online, just as the first vaccines were rolling out across Europe.

This time it will screen around 250 films, a quarter fewer than in previous years, with limited cinema capacity, as well as vaccine, testing and mask requirements and a shorter competition run.

The Berliner Morgenpost warned of a “catastrophe” if the festival turned into a “superspreader event,” while weekly Die Zeit called it “irresponsible” and “backward” not to have an online program.

Scott Roxborough, Europe bureau chief for The Hollywood Reporter, also questioned the festival’s choice, saying it arose from deep anxiety about the future of moviegoing in the face of streaming’s rise.

“Most theaters will have reopened or partially reopened but we still haven’t seen a real bounce back of arthouse movies, of independent movies in the way that a lot of people had hoped,” he told AFP. JB