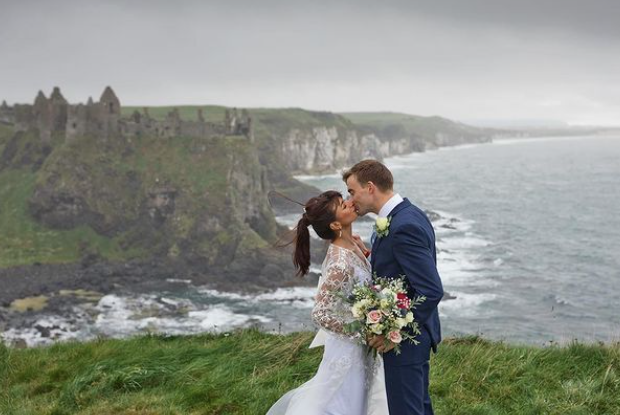 Glaiza de Castro is now married to her boyfriend, Irish businessman David Rainey, and she gave fans a glimpse of their dreamy wedding at a location shown in the hit series “Game of Thrones.”

The actress-singer told fans about her marriage while showing herself and Rainey on their wedding day on her Instagram page yesterday, Feb. 14. The couple got married in October 2021, as per their exclusive interview with “Kapuso Mo, Jessica Soho” last Sunday, Feb. 13.

De Castro looked ethereal in a white long-sleeved dress with sheer overlay, while Rainey donned a blue tuxedo. Their wedding was held at the Dunluce Castle in Northern Ireland, which was a shooting location for “Game of Thrones.”

De Castro admitted that she was hesitant to announce her marriage as she and Rainey planned to do another wedding in the Philippines.

“[I] honestly thought [whether] to share it or not since we are also preparing for a wedding in the Philippines,” she said. “Naisip ko na kung ishe-share man namin ‘to, gusto rin namin i-share yung naging kwento at proseso namin.” (I thought that if we would share this, we also want to share our story and process.)

De Castro also set up a YouTube channel that she shares with Rainey, where they showed snippets of their scenic wedding ceremony and moments from their relationship. Their first video on the channel, “Glaiza is now a Rainey!”, was released also last Sunday.

Among those who congratulated the couple were De Castro’s fellow celebrities Marian Rivera, Iya Villania, Angelica Panganiban and Gabbi Garcia.

De Castro and Rainey first met in 2018 and have been a couple for four years. They got engaged in December 2020.  /ra