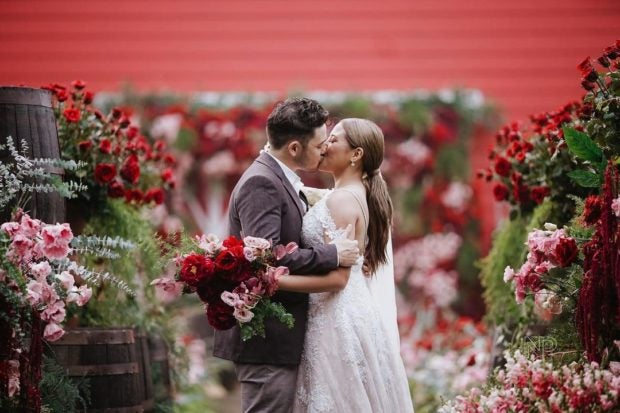 Morissette Amon and Dave Lamar have finally announced their marriage after keeping it a secret from the public “for the past several months.”

Amon told fans about her marriage by showing their wedding photo, taken by Nice Print Photography, on her Instagram page yesterday, Jan. 28. The musician couple got married at The Old Grove Farmstead in Batangas.

“We are so happy to finally officially announce that we are married! It was so hard trying to keep this a secret for the past several months, but we’re finally free!” Amon told fans. “What a ride it’s been, [Dave Lamar]! To the stars and the moon, I love you my husband!”

Lamar, meanwhile, showed a moment from their wedding as he made his announcement on his Instagram page, also yesterday.

“The journey has been incredible. I am so overwhelmed and blessed that God [led] me to my true north, my best friend, and now my wife! I love you, [Morissette].” he said to his wife.

The couple then gave fans a glimpse of their special day via their “wedding film” on Amon’s YouTube channel yesterday. The video featured moments from the couple’s wedding, as well as them performing a song that they wrote.

Despite the rain on their wedding day, Amon walked down the aisle in a white off-shoulder Michael Leyva gown, while Lamar donned a gray suit, also by Leyva.

“I vow to be the music to your lyrics, the rhythm to your blues, the cream to your coffee, the peanut to your butter, the fire to your ember, the sun to your sky, the stars to your moon, the smile to your tear and finally, I vow to always be your best friend, your safe place, your home,” Amon said in her wedding vows.

Lamar, for his part, said the memory of their wedding will “forever be engraved on my heart” as they both embark in a “new blank page.”

Amon announced her engagement to Lamar in December 2020, referring to him as her first love and “answered prayer.”  /ra

Morissette Amon engaged to Dave Lamar: ‘Our journey wasn’t perfect, but it’s ours’