BIGBANG to make a comeback in spring after four years 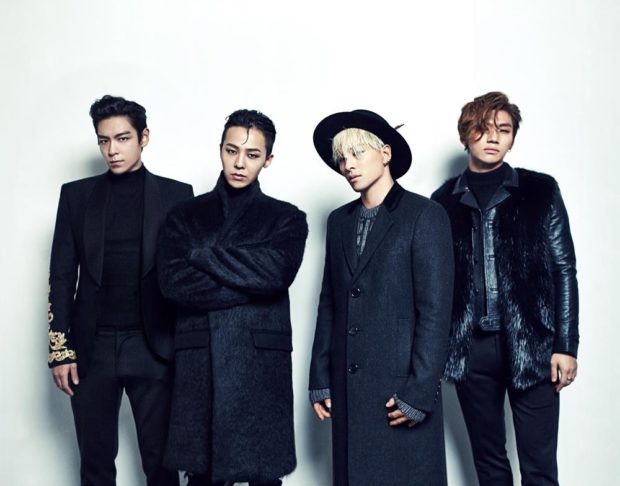 SEOUL — Boy group BIGBANG will come back to the K-pop scene this spring after four years of hiatus due to the members’ mandatory military duties, the group’s management agency said Monday.

“BIGBANG will drop a new song in the coming spring,” YG Entertainment said in a press release. “The group has completed its recording for the new song and is going to film a music video for the song.”

The date of the group’s return and the title of the new song, however, remain unknown.

Debuting in 2006 as a five-member group, BIGBANG has since released a number of hit songs, such as “Lies,” “Last Farewell,” “Fantastic Baby” and “Bang Bang Bang,” standing in the forefront of an Asia-wide boom of Korean pop music.

The group, however, had a four-year-long hiatus as four of its members — T.O.P, G-Dragon, Taeyang and Daesung — were enlisted in military service in that order. All able-bodied South Korean men must carry out compulsory service for about two years in a country that faces constant security threats from North Korea.

Seungri, who has not completed his service, was expelled from the band and YG Entertainment after a nightclub associated with him came under investigation over drug use and sexual abuse. He is currently serving his term in a military prison after being sentenced to a three-year prison term on nine charges, including prostitution mediation and overseas gambling, in August last year.

The group’s main rapper T.O.P, who received a suspended prison sentence for smoking weed in 2017, is expected to stay away from the music scene for the time being.

YG said he will end his contract with the agency soon after the group’s comeback and explore possibilities as an artist and businessman.

“We decided to respect his opinion that he wants to also expand the realm of his individual activities not only as a member of BIGBANG and discussed the matter well with other members,” the company said. “He will join BIGBANG activities any time if he is available.” (Yonhap)

Rise of rookies and return of old school in K-pop

A Big Bang farewell: ‘Like seeing your first love for the last time’