Vin Diesel on his driving skills, battling John Cena in ‘F9’ and playing a tree in MCU

If you scoff at the improbability of seeing seemingly ordinary people accomplish impossible feats of derring-do in the “Fast and Furious” franchise, you’ll have to listen to lead star Vin Diesel articulate his thoughts on its enduring popularity.

When we spoke to Vin in a virtual interview to discuss not just his driving skills, but also the movie series’ two-decade winning streak, we had a grand time listening to the 54-year-old actor wax nostalgic about “Fast’s” slow but consistent rise to the top.

“The Fast and the Furious,” the franchise’s first film, was released in 2001 and, in no time, propelled Vin and his bosom buddy Paul Walker—who died in 2013 following a traffic collision—to action stardom.

“I’m very good at driving,” Vin said with a smile. “In real life, I can even drive from one building to another … OK, I can’t do that (laughs)—I’m stretching it a little bit, but I’ve done a lot of things.

“But that is what’s fun about this series. We take ordinary people and turn them into superheroes, which is a comment about life in a way. Look around, we have superheroes all around us. People like my character, the proletarian Dominic Toretto, could be heroic at any time—and that’s basically the statement of the franchise.

“We celebrated the first film’s 20th anniversary in 2021. If you told me 20 years ago that Dom would be a doting father in 2021, I would’ve said, ‘You’re crazy!’ Yet, here we are. And that’s because our fans are so connected to this ‘Fast’ family that they feel as though they’re part of it.”

The Fast Saga, as its followers call it, isn’t just Universal Pictures’ biggest franchise—it is also the seventh highest-grossing film series ever, with a combined gross of over $6.6 billion as of January 2022.

If the Top 3 on that box-office boffo list—the Marvel Cinematic Universe (MCU), “Star Wars” and “Spider-Man”—have 27, 12 and 11 films, respectively, under their hefty belts, “Fast and Furious” has 10 so far, including the 2019 spinoff “Hobbs & Shaw.”

Aside from the franchise’s eagerly anticipated final two installments, Vin told us that he’s also developing a female-driven “Fast” franchise, and given how Michelle Rodriguez (as Letty Ortiz), has acquitted herself in the actioner through the years, isn’t it about time?

“F9,” which will finally be released in a limited run in Philippine cinemas beginning Wednesday, pits Dom and his friends against an adversary unlike anyone he has faced before: His estranged brother Jakob, who reappears in Dom’s life with an axe to grind!

“Well, anybody who has siblings knows that there are good days and there are rougher days, where we fight with them. Sometimes, we fight with the people that we love the most because [anything that concerns them] matters so much to us.

“Having Han (Sung Kang) and Dom reconnect balances the broken bond of Jakob and Dom and through it all, without spilling any spoiler, we arrive at where we’ve always been, which is family and how important it is. In ‘F9,’ we wanted to prove that sometimes, it isn’t easy to say, ‘Don’t turn your back on family,’ because even the best of us has our moments. I hope that comes across in the movie.”

Vin may look tough, but in this interview, he shows his gentle, vulnerable side. He even manages to pay tribute to the much-missed Paul Walker, who he calls Pablo. 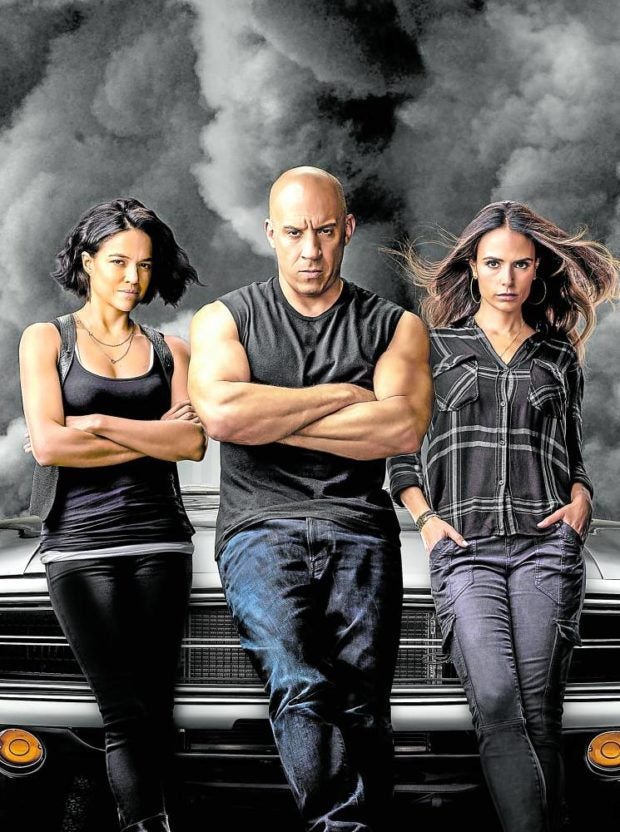 Our Q&A with Vin:

The franchise has a huge fan base in the Philippines, honed and developed over two decades. At which point over the course of nine films did you realize that The Fast Saga has become this self-sustaining action franchise?

To be honest, I still don’t know (laughs). But I don’t think of it like that. All week long last week, [director] Justin Lin and I were working 16-hour days you’d think we’ve never had success on this, because we were so intensely trying to think of ways to make the best “Fast 10” and finale ever.

But, I knew we were on to something special after “Fast 4” (“Fast & Furious”) was released. I knew that there was a mythology worth investing in. But even then, I still had to convince the studio.

When I presented “Fast 4” to them, I remember saying, “I could make ‘Fast 4’ and ‘Fast Five’ at the same time. And I remember them saying, “Get out of the building! You’re lucky we’re even trying this again.” So, yeah, it took many years.

The better question would be, “When did the studio execs realize that they had something that could sustain their studio?” Because it was that moment when we finally had their full support!

The Fast Saga has been around for more than two decades now. What makes this particular cinematic universe special?

That’s a good question. One reason is that it’s truly a pioneer in its multiculturalism. Metaphorically, the Toretto barbecue get-together represents that. You can come from anywhere in the world from all walks of life and sit at that table, like family. Even if you’re from Asia, Africa, the Middle East, Europe or South America, you’ll feel represented in our world.

It’s inspiring to see female characters in the series hold their own in action scenes. Could you tell us more about the female spinoff?

I was lucky enough that the studio allowed me to start developing that spinoff four years ago. So, right after “Fast 8” (“The Fate of the Furious”), I started hiring writers and developing it, so we’re already underway. Yes, we’re doing it (laughs)!

Were you threatened by John Cena in any way?

John will win the “good guy” competition every day. And while being a good guy doesn’t necessarily make great movies, John’s commitment and dedication were what he brought to the table. You could feel the respect and high regard he had for the franchise. He was excited about playing a villain in this movie, and he committed to it—that’s why I’m very grateful to him for that.

You often play tough but charming guys. Do you ever fear of getting typecast?

When I was younger in the industry, I did very much feared of getting typecast. So I acted in films like Sidney Lumet’s 2006 film “Find Me Guilty” and, 10 years later, with Ang Lee (in “Billy Lynn’s Long Halftime Walk”).

I also did those Marvel movies (“Guardians of the Galaxy,” “Avengers: Endgame”), where I played a tree (laughs)! And Groot wasn’t a tough guy; he’s a very innocent and loving tree.

But playing those roles might be one of the reasons why Dom is realized the way he is. He’s tough, yes, but you could feel his heart. He’s so open about his love for his family and friends.

You’re a father yourself (he has kids with Mexican model Paloma Jimenez). What advice would you give Dom about being a dad?

Patience and courage. The No. 1 advice I’d give Dom is something he probably doesn’t need: Just love your children—and that can go a long way. There are many different philosophies on how to raise our children successfully, but love is the key. When a child feels loved, nothing is impossible.

Your 11-year-old son Vincent Sinclair Diesel makes an appearance in this film as the younger Dom. How would you rate him, from zero to 100?

If you have to pick two from the “Fast and Furious” family, who would you choose as ideal partners in crime?

Pablo and Michelle … because they’re both “ride or die.” Pablo will ride to the ends of the earth with you. I miss his loving spirit. He was there for me in ways that you could only hope a brother would. You can count on both of them.