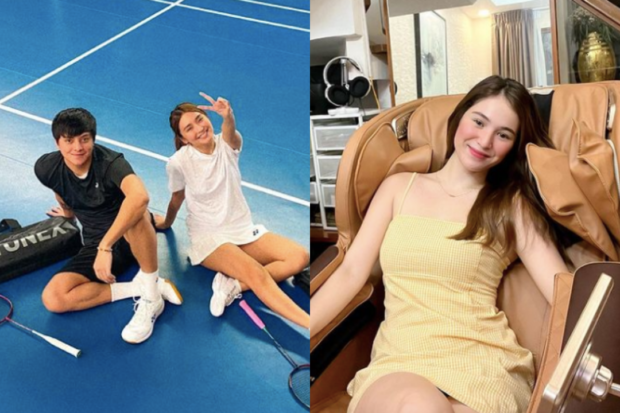 Kathryn Bernardo knows her place exactly in Daniel Padilla’s heart and it showed in her humorous reaction to insinuations made by an internet personality, linking her boyfriend with their fellow actor Barbie Imperial.

Fears that Padilla might be cheating on Bernardo first arose when internet personality Xian Gaza showed Imperial at what is apparently the house of Padilla’s mother, Karla Estrada, as seen on his Facebook page yesterday, Jan. 6. Gaza also released a series of Facebook posts on the same day, asking Estrada if there was anything romantic brewing between her son and Imperial.

“Kabogera ‘yun [as a] trending topic (That was sassy as a trendy topic)!” Lastimosa, meanwhile, quipped, though she did not elaborate on the details of her conversation with Bernardo.

Padilla, for his part, told fans to ignore the issue as he described it as “nonsense.” This was his reaction to one @solidkathniel who defended them on Instagram, also yesterday, by saying, “Ang bumangga, giba (those who oppose will break.)” 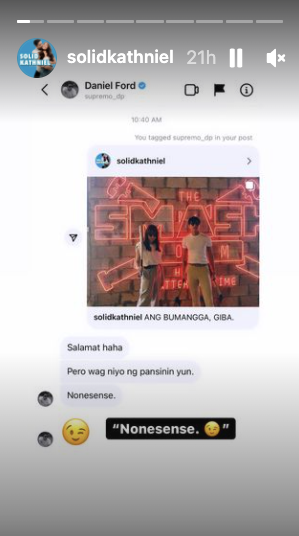 Other fans also came to the couple’s defense by showing various moments where Padilla can be seen taking care of Bernardo.

“I believe in ‘alagang Ford’ supremacy,” one @onlykthnl said while showing Padilla tying Bernardo’s shoelace and embracing her.

“Let Kathryn’s ‘alagang Ford’ statement be the assurance if some of you are still in doubt. Happy sila (They’re happy). Period,” another netizen, @IM_IN_COMA, told fellow fans.

Oh diba? Tinatawanan na lang din talaga yan nung dalawa for sure. Kaya kahit nakakainis na let's all keep our chill and don't give the guy the attention that he wants. Let Kathryn's “alagang Ford” statement be the assurance if some of you are still in doubt. HAPPY SILA. PERIOD. https://t.co/VADgqU7koq

Bernardo and Padilla have been in a relationship since 2012, but only confirmed it in 2018. They recently celebrated their pairing’s 10th anniversary and released the self-made documentary “KathNiel: Isang Dekada” to mark the milestone.  /ra