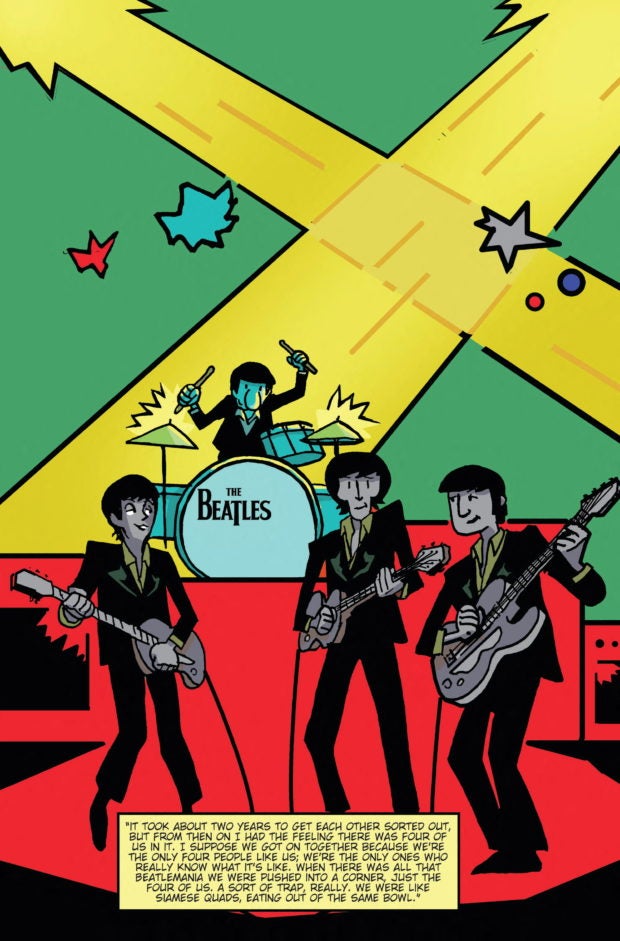 A page from a comic book celebrating the life of Ringo Starr is seen in this undated handout image obtained on Jan. 6, 2022. Image: Tidalwave Productions via Reuters

The life of former Beatles drummer Ringo Starr is being chronicled in a new comic book as part of TidalWave Comics’ “Orbit” series that celebrates public figures “who impact the world.”

The 22-page book will detail how Starr, 81, “overcame life-threatening illnesses during childhood to how he became one of the world’s best drummers of all time in The Beatles.”

Written by David Cromarty and illustrated by Victor Moura, the comic book will be available in both print and digital formats, and will be released on Jan. 12.

“This comic book has been in the work for years,” said publisher Darren G. Davis. “We have done comic books on the other Beatles so this one was a natural one to do for us.” GSG/JB

Read Next
Coco Martin OK even if second choice for lead role in Brillante Ma Mendoza film
EDITORS' PICK
Acer starts the year off strong with the Aspire Vero National Geographic Edition
Gear up and get ready to play with Yamaha Mio Gear
PH to import 60,000 tons of fish to cover shortage
Workers are exempted from ‘no vax, no ride’ policy – DOLE chief
Over 3 Million worth of prizes to be won at Smart Padala’s SENDali Manalo Promo!
#VotePH2022: COVID, power woes loom as poll concerns
MOST READ
Guevarra to Acosta: Obey rules on unvaccinated
Emma Stone calls Andrew Garfield a ‘jerk’ after he ‘lied’ about his ‘Spider-Man: No Way Home’ appearance
Cold-case investigation names surprise suspect in Anne Frank’s betrayal
Czech anti-vax singer dies after deliberate infection
Don't miss out on the latest news and information.