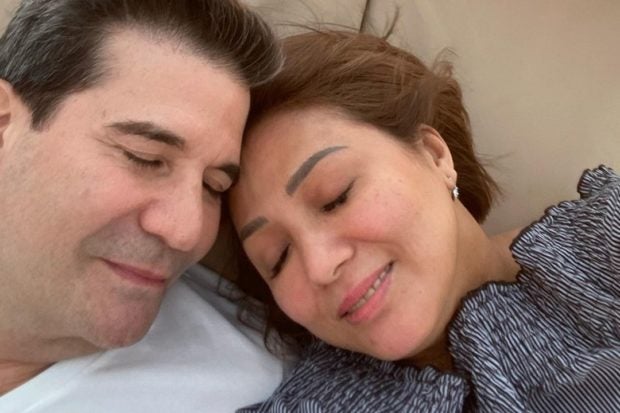 Cherry Pie Picache recalled how she and her fellow actor Edu Manzano officially started dating, a month since he confirmed their relationship.

The couple, who recently revealed they dated in the past, looked back at how their relationship started in their interview with Edu’s son Luis Manzano and his wife Jessy Mendiola, for Luis’ YouTube channel yesterday, Dec. 30.

Picache said the romance between her and Edu started with them having fun together on the set of “Marry Me, Marry You.” However, these “kulitan” moments made the actress question whether Edu is really serious in pursuing a relationship with her.

(In tapings, now that it’s lock-in, that’s how it goes usually, right? Of course you’ll tease each other. So when we were having fun, I thought, “Hmmm… is this just us teasing or what?” Of course, at my age, I don’t like that anymore. So I said if we take a break from the first cycle of lock-in taping and he put in some effort, okay. It turns out that he did exert effort.)

When Luis asked how the pair “sealed the deal” that they are officially together, Picache could not help but laugh while recounting the moment.

Turning serious, Picache added that she admires Edu for introducing himself to her loved ones, especially her son, Nio Tria.

“One nice thing about him (Edu), pati si Nio (even Nio), he respected so much the people that I love. Kinilala niya, dumalaw siya sa bahay, nagpakilala siya (He met them, visited me at my house, introduced himself),” she said.

The couple also recently revealed that they actually went out on dates 20 years ago and they “never drifted apart” despite no longer pursuing a relationship then.

Picache and Edu’s second shot at romance received approval from their respective children. Luis earlier said that while he has long considered Picache a friend in show business, he now sees her as family. Meanwhile, Tria said he would not disapprove if his mother ever decides to marry Edu in the future.

The couple also spent Christmas together, with Edu spending the holiday with Picache’s family. JB