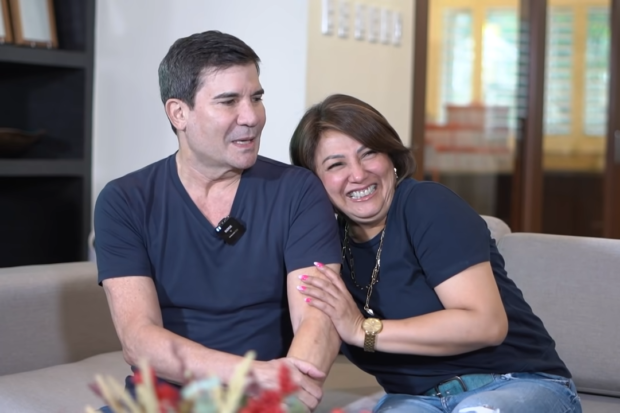 Cherry Pie Picache and Edu Manzano apparently have together found love the second time around as they disclosed that they used to go out on dates about two decades ago.

The couple made this revelation in their interview with Edu’s son Luis Manzano for his YouTube vlog yesterday, Dec. 27. Edu explained that he and Picache chose to be low-key about their past romance, which lasted for about a year.

“Tahimik lang kami no’n (We were quiet about it then). It was almost a year,” he told his son.

“We were dating almost a year. Like mga (about) two decades ago,” Picache added while joking, “Hindi niya ako makalimutan (He could not forget about me).”

Despite ending their relationship 20 years ago, Edu and Picache continued to see each other in various events or gatherings.

“After the 20 years, lagi kaming nanatiling magkaibigan (we remained friends). We never drifted apart. We’d always see each other sa iba’t ibang okasyon and sa iba’t ibang mga gatherings (in various occasions and various gatherings),” Edu narrated. “We would always be talking sincerely. We knew that we still like each other.”

Picache recalled that there was always “tension” between her and Edu whenever they crossed paths.

(Every time we would see each other after that, you’d think, “It’s like the way he looks is different.” But I’d always dismiss it because he’s a charmer, isn’t he?)

Edu and Picache have had respective relationships over the past two decades. Luis described their situation as “nagkakasalisihan (keeps on missing each other)” since whenever Edu was in a relationship, Picache happened to be single and vice versa.

Aside from their past relationship, Edu and Picache also talked about the qualities that they like most about each other. For Picache, she likes how Edu’s world “revolves around his children” and that he is a “good man.” On the other hand, Edu appreciates Picache’s work ethic and principles, as well as her acts of service.

Luis then told Picache that while he has always considered her a friend in the showbiz industry, he now sees her as family.

Aside from Luis, the couple’s relationship also got approval from Picache’s son, Nio Tria, with her former partner Gary Tria. Nio said he trusts his mother’s decision should she decide to get married to Edu in the future.

Edu and Picache also received support from his ex-wife, veteran actress Vilma Santos, who wished them the best in their relationship.  /ra