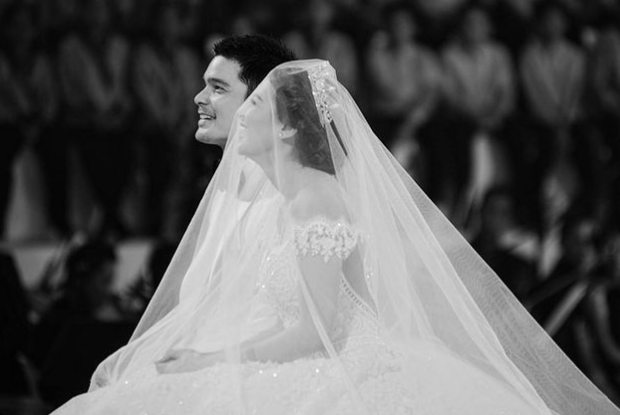 Dingdong Dantes looked back at the most “glorious” part of his wedding with fellow actor Marian Rivera as they celebrated their seventh anniversary as a married couple.

Dantes admitted that Rivera’s walk down the aisle gave him goosebumps while he showed a moment from their wedding on his Instagram page yesterday, Dec. 30.

“One of the highlights of our wedding day for me was Marian’s walk. She was accompanied by the majestic voices of the Ateneo and La Salle Boy’s choir to the tune of Angelo Badalamenti’s ‘The Beach’ theme [score],” he recalled.

Dantes then described that moment as a “core memory” because of how “magical” it was for him.

“[The] memory of how glorious and magical that moment was is a core memory of mine and will forever have that ‘tindig balahibo’ mark. That was seven years ago. Happy anniversary, [Marian Rivera]!” he greeted his wife.

For her part, Rivera greeted Dantes a happy anniversary by showing a photo of themselves in an embrace on her Instagram page, also yesterday.

Dantes and Rivera got married in a Spanish romance-themed “royal wedding” held at the Immaculate Conception Cathedral in Quezon City in Dec. 30, 2014. They have since welcomed their two children, Zia and Ziggy. JB