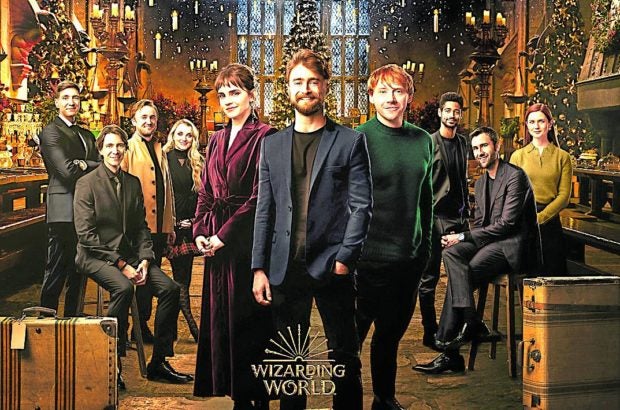 Cast of “Harry Potter,” led by (center, from left) Emma Watson, Daniel Radcliffe and Rupert Grint, returns to where the magic began. ­—PHOTO from HBO GO

Would you like to take a trip back to Hogwarts? We had mixed feelings about the prospect of revisiting Harry Potter (Daniel Radcliffe), Hermione Granger (Emma Watson) and Ron Weasley (Rupert Grint), not to mention the wizards, muggles, Death Eaters and wraithlike Dementors they cross paths with, in “Harry Potter 20th Anniversary: Return to Hogwarts.”

Jointly helmed by Casey Patterson and Joe Pearlman, the much-anticipated two-hour retrospective about the film series, which is the third highest-grossing franchise of all time (after the Marvel Cinematic Universe and “Star Wars” movies), will be streamed exclusively on HBO Go beginning tomorrow. True, it’s impossible to ignore the film series’ indelible contributions to cinema and pop culture following its blockbuster eight-title rollout since 2001 (“Harry Potter and the Sorcerer’s Stone”), but there’s certainly wisdom in leaving some precious classics well enough alone.

After all, while HBO Go had us tripping the nostalgic light fantastic by way of the heartwarming “Friends” reunion early this year, we weren’t as swept off our feet by the mirthless mush and interminable slog that the “Sex and the City” revival quickly turned out to be. As far as the latter show is concerned, it came (no pun intended) and quickly went pfft—just like that. But, given the all-consuming warmth it earnestly conveys onscreen, “Harry Potter 20th Anniversary: Return to Hogwarts” proves there’s more to art and commercial success that turns colleagues into veritable family members.

And considering the number of years we had eagerly patronized each installment of the series, it’s hard not to feel any kinship forged between Harry’s fantastical wizarding world and ours.

The star-studded, four-chapter film doesn’t just take viewers on a trip down memory lane, it also lets us take a peek behind the scenes—from the fortuitous moment Emma picked up the first book at age 8 to the time she began playing Hermione at age 11 after acing her auditions with Rupert and Daniel.

In precious footage shared, the laugh-out-loud scenes were as many as the lump-in-throat moments—like, seeing the adorable 11-year-old Daniel finally try out for the role after producer David Heyman, who saw him in a BBC version of “David Copperfield,” managed to convince the young actor’s reluctant father to give the project a try. Understandably, Dan’s England-based parents didn’t want him tied up to a prospective seven-film project to be shot in LA.

During his audition, Tom Felton clinched the role when he was caught on camera snapping “duh!” at Emma—exactly as Draco Malfoy, his character in the films, would—because whip-smart as she was, Emma didn’t know what the boom microphones hovering over their heads were.

Emma would later reveal her huge crush on Tom, especially when they were filming the fourth film “Goblet of Fire.” In those days, the first thing Emma would do every time she would arrive on the set was check the call slip if Tom had scenes to shoot that day. “He was No. 7,” the lovely actress vividly recalled, giggling. (The two never dated.)

Tom himself had his own “rude awakening” when it was his turn to shoot one of Draco’s terrifying moments with his abusive father Lucius, played by Jason Isaacs.

A scene that was left on the cutting-room floor shows Tom visibly shaken and his eyes welling with tears soon after Jason, in all his nasty glory, almost hits his hand with his cane (“I didn’t realize how sharp the head was till it was too late,” said Jason, chuckling).To mirror the characters’ growth, the tone of the series drastically changed as the helm of the franchise went from one distinctly idiosyncratic director to another—from Chris Columbus (“Sorcerer’s Stone,” “Chamber of Secrets”) and Alfonso Cuaron (“Prisoner of Azkaban”) to Mike Newell (“Goblet of Fire”) and David Yates (“Order of the Phoenix,” “Half-Blood Prince,” “Deathly Hallows” Parts 1 and 2).While Columbus encouraged his young cast to play in between shoots, Cuaron gave them tasks—like, writing everything they knew about their characters. For her assignment, Emma wrote a 12-page character analysis, whereas Rupert didn’t submit any because, as he told Cuaron, “It isn’t something Ron would do!”

While Emma was considered “the smartest member of the cast,” she started toying with the idea of not returning to the series around the time they filmed “Order of the Phoenix” because she was starting to feel lonely and, as she explained, “The fame thing finally hit home. I felt that ‘this is kind of forever now!’” The actors also paid tribute to members of the cast who have since passed on: Richard Harris (Albus Dumbledore, replaced by Michael Gambon), Richard Griffiths (Vernon Dursley), John Hurt (Ollivander), Helen McCrory (Narcissa Malfoy) and Alan Rickman (Professor Severus Snape), among countless others.

While not every huge star in the series appears in the reunion, it nonetheless paints a deeply humanizing portrait of its exceptional actors—dead or alive. Take Ralph Fiennes, who disclosed that he was “a little intimidated” by Alan Rickman’s “precision and expert delivery of lines.”

In another scene, a very excited and nervous Daniel reminded his costars to “focus and be on your toes” when he learned that Gary Oldman would soon be joining the cast as Sirius Black. The two would eventually become very close.

Indeed, the franchise was as much a coming-of-age tale for Harry, Hermione and Ron as it was for the young actors who brought them to palpable life: Daniel, Emma and Rupert. Emma noted that one of her ‘most favorite scenes ever’ was seeing Harry and Hermione slow dancing to Nick Cave and the Bad Seeds’ “O Children” in “Deathly Hallows,” while also expressing why Hermione kissing Ron “felt so wrong.”

Be that as it may, however the cast members may have felt about their time on the set of “Harry Potter,” what’s crystal clear is how the franchise has resonated strongly with young and not-so-young viewers everywhere.

Evanna Lynch was spot-on when she mused about the thematic pertinence and relatability of Harry Potter’s story. It isn’t just about a bunch of misfits coming together, she mused, “It’s about accepting your oddness as your superpower!” INQ