Dress like BTS: Outfits worn by the K-pop band go under the hammer in January | Inquirer Entertainment
Close
menu
search

Dress like BTS: Outfits worn by the K-pop band go under the hammer in January 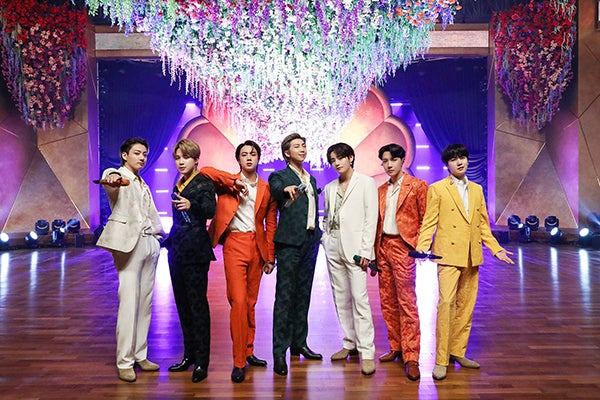 Have you always dreamed of dressing like RM or Jungkook from BTS? Here’s your chance. Outfits worn by the Korean boy band during the last Grammy Awards ceremony will go under the hammer in January at Julien’s Auctions. They could fetch tens of thousands of dollars.

The arrival of the members of the K-pop group BTS at the 63rd Grammy Awards ceremony didn’t go unnoticed. Jungkook, J-Hope, V, RM, Jin, Suga and Jimin took to the red carpet in outfits from Louis Vuitton’s Fall-Winter 2021-2022 men’s collection, prompting some fans to speculate about a possible partnership with the luxury label. Later in the evening, the seven artists changed into different gear to perform their single “Dynamite” on stage.

These performance ensembles will be auctioned off on Jan. 30 at a massive sale of celebrity items staged by Julien’s Auctions in Beverly Hills. The outfits could fetch between $30,000 and $50,000, according to the auction house’s estimates.

However, it’s possible that bidding will quickly rise for these black, white and orange custom-made suits, given the boy band’s fans’ infatuation with their idols’ outfits. In fact, ensembles worn by the septet in the official video for “Dynamite” sold for $162,500 last January, although Julien’s Auctions had estimated them at $40,000. That was no surprise for Darren Julien, the auction house’s director.

“If you take a set of outfits that are worth $2,000 and put them on BTS, have them perform in them in a music video and then the song is nominated for a Grammy, you just increased the value of those outfits 81 times,” he told The Guardian in May.

Other outfits worn by musicians at award ceremonies will be going under the hammer on Jan. 30. Among them is a white and gold dress adorned with rhinestones that Dolly Parton wore when she was honored with the MusiCares “Person of the Year” award in 2019. It is estimated to be worth between $2,000 and $4,000. Collectors can also try to acquire the silver outfit Katy Perry wore during a concert in Nashville in 2012. This is estimated to cost between $3,000 and $5,000, according to Julien’s Auctions.