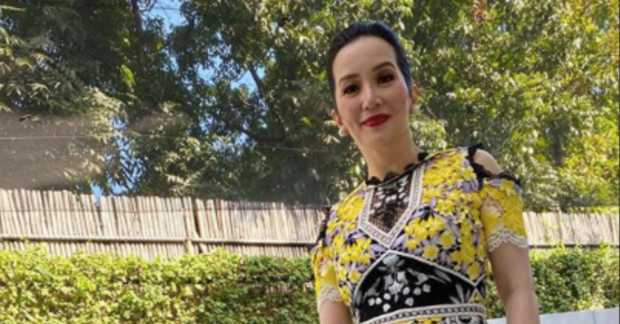 MANILA, Philippines — Anyone who accuses Kris Aquino of stealing the jewels of Imelda Marcos with no proof may face a criminal case, former chief justice Maria Lourdes Sereno warned.

Sereno issued the warning through her Facebook page on Nov. 27, after some netizens revived old rumors of the said accusations on social media.

(You may face a criminal case for accusing Kris Aquino of using Imelda’s jewelry, which according to the Supreme Court came from stolen wealth. The Central Bank of the Philippines and the PCGG have said it is impossible.)

(From now on, we will take screenshots of everyone who makes those comments, including your profile details, and send them to the Central Bank, PCGG and the person you are slandering.)

According to Sereno, spreading such rumors tarnishes not only Aquino’s name but the BSP and PCGG’s as well.

(So we will already collect screenshots of such comments and send them to the authorities.)

(The criminality of your activities is already too much.)

Aquino herself quashed this rumor back in 2016 through her Instagram page, explaining that she bought her necklace from Italian jewelry brand Bottega Veneta with her hard-earned savings.

Meanwhile, back in 2015, the PCGG assured that Marcos’ jewelry collections were secured in a vault, making it impossible for anyone to steal them. JB

Read Next
LIST: ‘Fan Girl,’ ‘Watch List,’ ‘Magikland’ lead FAMAS best picture nominations
EDITORS' PICK
Acer starts the year off strong with the Aspire Vero National Geographic Edition
Gear up and get ready to play with Yamaha Mio Gear
PH to import 60,000 tons of fish to cover shortage
Workers are exempted from ‘no vax, no ride’ policy – DOLE chief
Over 3 Million worth of prizes to be won at Smart Padala’s SENDali Manalo Promo!
#VotePH2022: COVID, power woes loom as poll concerns
MOST READ
Guevarra to Acosta: Obey rules on unvaccinated
PH to import 60,000 tons of fish to cover shortage
Emma Stone calls Andrew Garfield a ‘jerk’ after he ‘lied’ about his ‘Spider-Man: No Way Home’ appearance
Cold-case investigation names surprise suspect in Anne Frank’s betrayal
Don't miss out on the latest news and information.