Rabiya thrilled at the prospect of acting with ‘childhood crush’ Dingdong 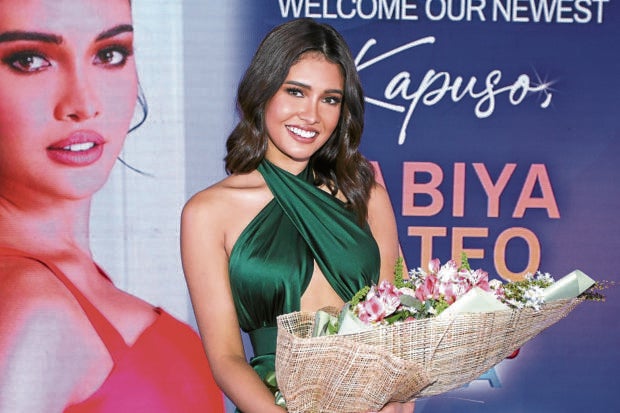 One of Rabiya Mateo’s earliest memories of show biz was watching Dingdong Dantes’ projects on television. Now, the beauty queen and aspiring actress is with GMA 7, and she can’t quite believe that the possibility of working with her biggest childhood crush is no longer a farfetched dream.

“I wasn’t even in school yet when I watched his series (“Sana’y Ikaw Na Nga”) where his character is named Carlos Miguel, and he was paired with Tanya Garcia. I was so inspired because he’s not only a good actor, but also a good host. He’s very well-rounded,” she told the Inquirer in a virtual conference.

There had been plans for Rabiya to make a guest appearance in Dingdong’s infotainment program “Amazing Earth,” but they have yet to find a schedule. “I had offers and I wanted to do them, but they didn’t push through. Still, I believe in perfect timing,” she said.

Marian Rivera was another star she used to love watching. And little did she know then that she would end up with Dingdong. “I remember imitating her performance in ‘Mari Mar,’” she said.

The Miss Universe Philippines 2020 wasn’t surprised that she ended up in show biz. “My mom told me that I used to act in front of a mirror, imitating the contravidas. She said I wasn’t a shy kid and would always go out to entertain visitors,” she recalled.

The 25-year-old celebrity, a semifinalist at the Miss Universe 2020 pageant in the United States, signed a network contract with GMA 7.

“It feels home… Before flying to the States to compete, I was able to meet some GMA 7 executives. They asked if me if I wanted to try acting and I blurted out, ‘Yes!’” Rabiya said. “After the pageant, I was told by my manager, Jonas Gaffud, there was an offer and I was like, ‘Go!’”

She recently made her acting debut in a horror episode for “Kapuso Mo Jessica Soho’s” Halloween special, and has just finished taping for a drama episode of “Wish Ko Lang.” Her first major acting job, meanwhile, will be a leading role in the soap “Agimat ng Agila.”

“It’s a lead role. I’m not an expert in acting, but they must have seen something in me,” said Rabiya, who’s set to play a police agent. “I love the fact that my character isn’t a damsel in distress. She’s smart. She saves herself and everyone else. I made a promise to myself that I will always do my best, so I will undergo workshops. I also enrolled in boxing lessons so I can be ready for the fight scenes.”

One thing about pageantry that she thinks will help her in her show biz journey is dealing with public scrutiny.

“I now realize that I’m a public figure. Back then, I was shocked when people started making comments about me. And they used to hurt me. But you get used to it,” Rabiya said.

“I used to be a people-pleaser. I wanted to be appreciated because that’s how I draw strength. But now I realize that how others see you isn’t as important as how you see yourself,” she added. “It’s a cruel industry, but I think I’m ready for it—emotionally, mentally, even spiritually.”

While she’s proud of being a beauty queen, she doesn’t want it to be her sole identity. “I don’t want to be just remembered as a beauty queen. I want people to realize that I was given this job because I’m capable of it,” she said. INQ