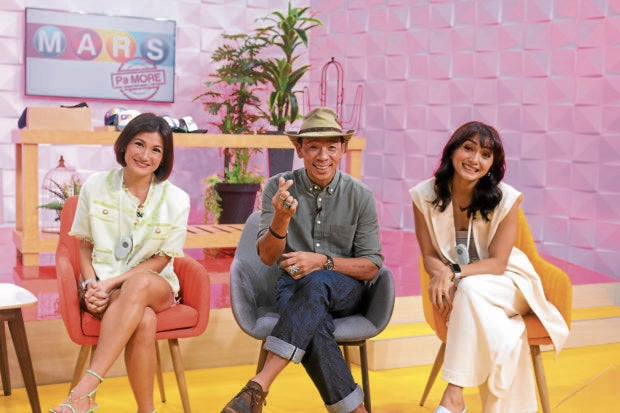 With companies adopting remote work due to the pandemic many fathers have, unwittingly, become more involved in running the household and raising the children, Camille Prats observed. And it’s refreshing, she said, to see local family dynamics evolve and break away from the notion that outside work is only for fathers, and house work, only for mothers.

“The idea of family is changing and is no longer about the mother staying at home and doing all the work. But now I see a lot of men—especially during the pandemic—becoming more involved in taking care of their kids and helping in the house,” she told the Inquirer in a Zoom conference for the family talk show “Mars Pa More,” which started airing new episodes from its new studio early this month.

“They’re cooking, growing plants, and they’re showing others that there’s nothing wrong with that,” Camille said. “Back then, there’s this separation between a mother’s and father’s responsibilities. Now there’s better harmony.”

Camille has three kids: 4-year-old daughter Nala, and 2-year-old son Nolan, with husband John Yambao; and her eldest son Nathan with her late first husband Anthony Lansangan, now 13. “One of the things I really appreciate is the undivided time he (VJ) has for the kids,” she said. “When we’re bonding with the kids, he requests that we put away our phones to make sure that it’s quality time.”

“He and I have more time being with the family now and I think that helped us create a better system in terms of our goals as a family,” she added.

Camille’s cohost Iya Villania joked that her husband, Drew Arellano, could be a little tidier at home. But seeing him devote his time to their children—5-year-old son Primo, 3-year-old son Leon, and 1-year-old daughter Alana—is just priceless, Iya said.

“I enjoy watching the moment he has with the kids.”

When it comes to chores, Iya makes sure to communicate with Drew and make her expectations clear. “I’m straightforward… I tell him, ‘Can you do this while I work? Can you help me with this,” Iya said. “Each household is different. What may work for my family may not necessarily work for others. It’s all about finding what works for yours.”

“He also taught me to be open to other ways of doing things. Thursday is usually our cleaning day and I try to keep it that way. But he would say, ‘We can clean another day,’” she added. “We also have to listen to what our husbands have to say, because it’s also for the family’s good. You may not be used to his suggestions, but have to be open to exploring it. It’s not going to hurt!”

Meanwhile, Kuya Kim Atienza, the newest addition to the “Mars Pa More” family, couldn’t help but look back at how he used to juggle work and family years ago. He used to think he kept a good balance. But in hindsight, he said he could have probably spent more time doing activities with his children when they were younger.

“This is one thing I realized amid the pandemic. I used to think that everything was balanced. But then my kids started growing up and I realized that maybe I should have done more things with them,” said the weather- and trivia man, who has three children with wife Felicia Hung: daughters Emmanuelle and Eliana and son Jose.

“When my daughter (Emmanuelle) asked me to learn the game ‘Minecraft,’ I said no. Now, looking back—my daughter’s not here (studying in the United States), I should have said yes and played for hours. When my son asked me to learn how to ski, I said no. Now, I’m older and can’t ski anymore… I should have spent more time with the kids doing things they love,” related Kuya Kim, who will be an empty nester in a couple of months.

As “Mars Pa More’s” new Pars, Kuya Kim offers a male perspective on family-related matters, dispenses fun trivia, and features various dining destinations and outdoor activities. “We were surprised when we first learned that Kuya Kim was joining us,” Iya said. “But this will help broaden our audience, because there are also pars who tune in and are curious about our topics. And Kuya Kim will have them covered.” INQ