Diego Loyzaga to GF Barbie Imperial on her being linked to Alodia-Wil split: ‘It’s just noise’ 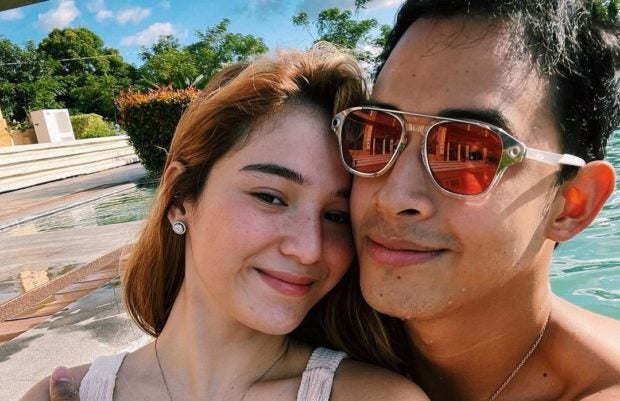 Diego Loyzaga told his girlfriend Barbie Imperial not to “get caught up in all that noise,” amid speculations that she was involved in the breakup between vloggers Alodia Gosiengfiao and Wil Dasovich.

The actor expressed his love for Imperial while showing a photo of them together in a swimming pool on his Instagram page today, Nov. 17.

“Don’t get caught up in all that noise. It’s just noise,” he addressed the actress. “My baby [girl] and I are [chilling]. So sit back, relax, enjoy life.”

Rumors that Imperial was the cause of Gosiengfiao and Dasovich’s breakup circulated online after social media personality Xian Gaza made a post about an influencer couple on his Facebook page yesterday, Nov. 16. Gaza claimed that a male influencer was caught by his girlfriend hugging a Star Magic artist at a hotel in Parañaque.

While Gaza did not mention any names on his post, netizens speculated that the influencers he was referring to are Gosiengfiao and Dasovich, while the Star Magic Artist is Imperial.

Gosiengfiao announced last Sunday, Nov. 14, that she and Dasovich have broken up for “a while.” She did not disclose the reason behind the split, though she and Dasovich are no longer following each other on Instagram as of this writing.

Gosiengfiao and Dasovich confirmed their relationship in 2018, after the cosplayer was seen in his YouTube vlog several times. During their first year together, Dasovich spent most of his time battling colon cancer.

According to Dasovich, Gosiengfiao helped him get through that tough time in his life, as she flew to San Francisco to be with him for some of his cancer treatments. Dasovich was eventually declared cancer-free in early 2018.  /ra

Read Next
‘Avatar: The Last Airbender’ casts Paul Sun-Hyung Lee as Uncle Iroh
EDITORS' PICK
Comelec division junks petition to cancel Marcos COC for president
Acer starts the year off strong with the Aspire Vero National Geographic Edition
PH logs 37,070 more COVID-19 cases; over 33K others recover
‘Not yet the end’: Lawyer says Marcos Jr’s DQ cases to take lengthy process
The best of bayside and city living at SMDC’s Sail Residences
Over 3 Million worth of prizes to be won at Smart Padala’s SENDali Manalo Promo!
MOST READ
NBI foils escape attempt of Kerwin Espinosa, two others
Marcos camp ‘extends hand of unity’ after COC cancellation bid is thrown out
Wendell Ramos finally gets to hold his newborn for the 1st time
No vaccine, no French Open for Djokovic, says French Sports ministry
Don't miss out on the latest news and information.