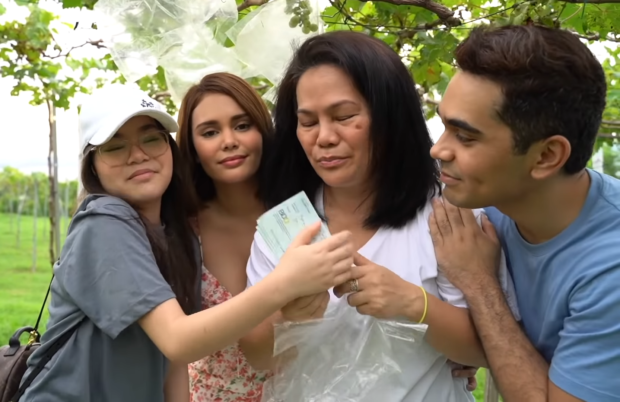 Ivana Alawi with her family. Image: screengrab from YouTube/Ivana Alawi

Ivana Alawi treated her mother to a whopping P1 million surprise birthday gift, as their family went on a fruit picking trip to Tanauan, Batangas.

The actress-vlogger explained that she decided to give her mother, Fatima Alawi, money for her birthday since the latter refused her offers to buy gifts, as seen on Ivana’s YouTube vlog yesterday, Nov. 13.

For the said birthday surprise, Ivana hung 10 bank checks amounting to P100,000 each in a vineyard that they visited. The actress and her siblings, Mona and Hash, pretended they would play a game wherein the one who gathered the most grapes in one minute would win a prize.

According to Ivana, her mother had always wanted to go fruit picking but she never got the chance to do so.

When the “timer” for their game started, Fatima was surprised to see a plastic bag containing a P100,000 check hanging from a grapevine. Fatima asked Ivana if the check was real, and the actress encouraged her to pluck the bag from the tree and to look for more bank checks.

Fatima only gathered seven checks when the timer for the “game” ran out, but Ivana told her to look for three more scattered around the vineyard. It ended when the actress’ mother finished getting all 10 bank checks.

Aside from the P1 million given by Ivana, Hash and Mona each gave Fatima P100,000.

Aside from grape-picking, Ivana and her family went fishing and jet skiing in a lake in Tanauan. The family also enjoyed a picnic, where they sang “Happy Birthday” to Fatima.

Along with her work as a model and actress, Ivana has also ventured into music as a singer. She released her debut single titled “Sana All” in February last year. JB