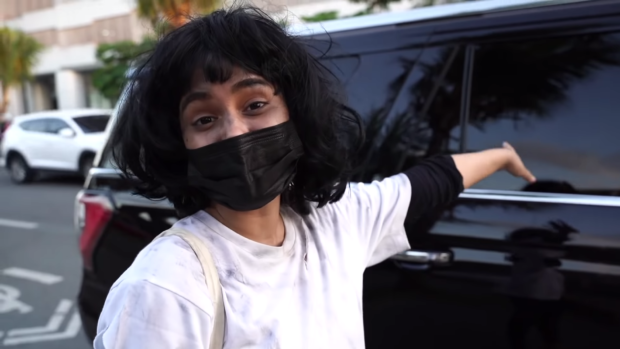 Ivana Alawi dresses up as a homeless person in one of her vlogs. Image: screengrab via YouTube/Ivana Alawi

Ivana Alawi said she is ready to face possible legal issues regarding one of her recent street pranks, where she rewarded people for giving her alms while she was disguised as a beggar.

Alawi gave cash to people who gave her money or food while she walked the streets disguised as a homeless person for her March 14 YouTube vlog. As she explained then, she did the prank because she wanted to experience firsthand the living conditions the less fortunate and extend help to them. Despite the good intentions, she was criticized by some for allegedly promoting begging and violating the Anti-Mendicancy Law of 1978.

“Kung may nalabag akong batas, ‘di kasuhan na lang nila ako. Haharapin ko ‘yon. Lalaban ako (If I violated a law, then let them sue me. I will face it. I will fight),” said Alawi in an episode of her vlog yesterday, April 3, where she also did a breakfast mukbang and unboxed her YouTube Diamond Play Button award with her family.

She also stressed that she does not think she did anything wrong with the said street prank.

“Ang intention ko was to just help out and to inspire people. Wala akong tinapakan na tao, wala akong nasaktan na tao, and masaya ako sa video. I would do it again,” she added.

(My intention was to just help out and to inspire people. I did not step on anyone, I did not hurt anyone, and I am happy with my video. I would do it again.)

Alawi also kept her word when she said she would meet up with Joselito Martinez, the 58-year-old kakanin vendor she met during her prank. She said she went shopping with the old man two days after the release of her street prank video.

She showed some clips of her trip with the kakanin vendor, where she had lunch with him, bought him some home appliances, a motorcycle, and gave him what appears to be a check. The vlogger said she also had Martinez take a swab test before they met again.

Under the Anti-Mendicancy Law of 1978, a person who gives alms is penalized and those who beg for alms would have to pay a fine or serve time in prison. The law aims to prevent the exploitation of minors through begging and “provide habilitative services for those already exploited or in immediate danger of exploitation.” JB