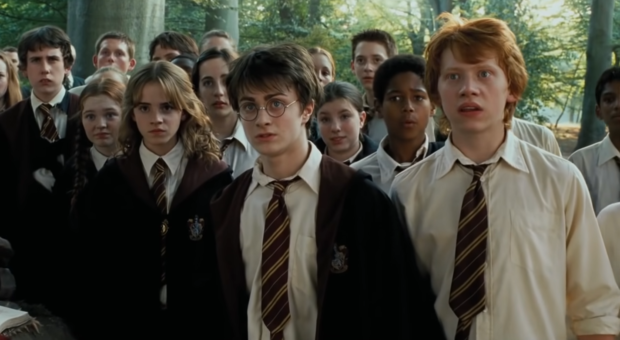 The cast of “Harry Potter.” Image: screengrab from YouTube/Wizarding World

“Harry Potter” director Chris Columbus expressed interest in making a film adaptation of the stage play “Harry Potter and the Cursed Child” as well as reuniting the original movies’ cast.

Columbus said this while recalling what it was like to work with “Harry Potter” actors Daniel Radcliffe, Emma Watson and Rupert Grint, in an interview with Variety last Saturday, Nov. 6.

The director admitted that helming a movie adaptation of “The Cursed Child” is one of his “fantasies.”

“I would love to direct ‘The Cursed Child.’ It’s a great play and the kids are actually the right age to play those roles,” Columbus said in the interview. “It’s a small fantasy of mine.”

Columbus then recounted what it was like to work with young Radcliffe, Watson and Grint. He said it was a challenging task but it eventually became easier by the third film, “Harry Potter and the Prisoner of Azkaban.”

“I couldn’t get them to stop smiling, and it really became an exercise and acting class for me as a director,” he recalled.

When asked if he had been in touch with any of the original cast members, he named Radcliffe and actor Tom Felton as the ones he communicated with the most. Felton played the character Draco Malfoy in the film series.

“Dan Radcliffe, probably the most. Tom Felton and I texted a lot,” Columbus was quoted as saying.

The “Harry Potter” movie franchise is celebrating its 20th anniversary this month. The first film premiered in theaters in November 2001.

“Harry Potter and The Cursed Child” is a play written by Jack Thorne, based on a story by Thorne, John Tiffany and the “Harry Potter” book series author J.K. Rowling. It premiered in July 2016, and later won Laurence Olivier and Tony awards. Dana Cruz/JB