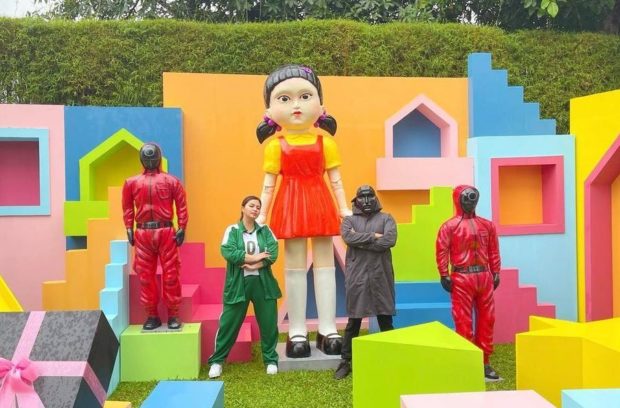 Angel Locsin and her husband Neil Arce transformed their home into the remote island in the hit South Korean series “Squid Game” for their first Halloween as a married couple.

Locsin and Arce decorated their home with standees of “Squid Game” guards, the various shapes in the dalgona candy game and the doll from the show, as seen on their YouTube vlog yesterday, Oct. 23.

The actress wore a green tracksuit, similar to the ones worn by players in “Squid Game,” while Arce dressed up as The Front Man from the series. They also invited friends over to celebrate with them.

“Who wants to play a game?” the couple asked fans. “Hindi man tayo makalabas (We may not be able to go out), [but] we won’t let this pandemic dampen our Halloween spirit!”

Locsin and Arce assured that proper safety protocols were practiced during the party.

According to Locsin, she did not grow up celebrating Halloween but she enjoys the “ridiculous costumes” that people wore at parties.

(One of my favorite things about Halloween is that the whole community wears ridiculous costumes, and there is no judgment. Whether you have the budget or not, you go all out or not, you are accepted.)

(Since we will be celebrating our first Halloween together [as a married couple], we thought of putting just a little bit more effort into it.)

Locsin and Arce tied the knot in a civil ceremony on July 26. They showed their “not so o-fish-ial” wedding video to fans later on Aug. 14. JB