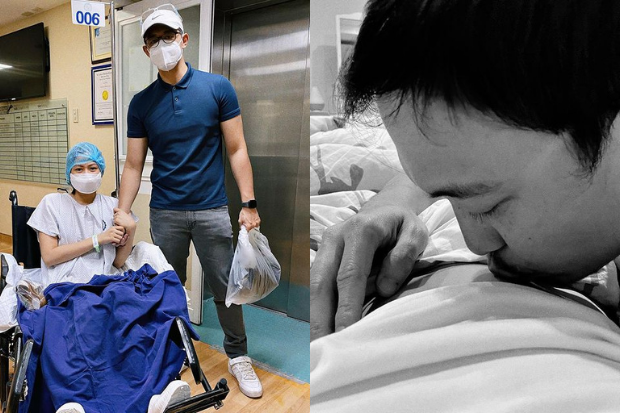 Alex Gonzaga confirmed that she suffered a miscarriage as she opened up on the grief that she and her husband, Lipa City councilor Mikee Morada, are experiencing.

The actress recalled the events leading to her miscarriage on her Instagram page yesterday, Oct. 17. She also showed a positive pregnancy test along with photos of herself and Morada at a hospital.

“[Two] months ago we found out that I was pregnant and [three] weeks ago, we got [the] heartbreaking news that we might be having an anembryonic pregnancy (blighted ovum),” she narrated. A blighted ovum is where a fertilized egg cell does not develop or stops developing, leading to miscarriage.

Gonzaga explained that she and Morada were advised by a doctor to wait for “the process [to] naturally take its course,” so they decided to keep the news to themselves. She also recounted hoping and praying that things would turn around for her pregnancy.

“The waiting and praying tested our faith and there [was] a lot of crying,” Gonzaga admitted. “[Every day] we were clinging on to a miracle that an embryo would still appear but last Tuesday (Oct. 12), the Lord’s will prevailed and we finally closed the book of our first pregnancy.”

The actress then consoled couples who have gone through miscarriages and reminded them not to blame themselves.

“[Don’t] ever lose hope. It’s not your fault this happened. At your own pace, you can start to grieve and heal,” she said, while also expressing hope that she and Morada will get their “ultimate desire” someday.

“To our baby whom we almost had, thank you for giving mommy and daddy joy even for a short span [of time],” she addressed what would have been her first child.

Morada also confirmed the news in his Facebook page yesterday. He expressed hope that he and Gonzaga will have their prayers for a child granted someday.

Gonzaga and Morada tied the knot in an intimate ceremony in November 2020. The actress announced their marriage earlier this year. JB