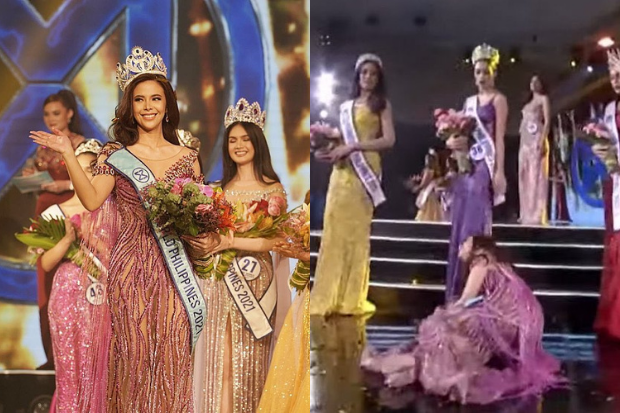 Miss World Philippines’ new queen Tracy Maureen Perez stumbled onstage twice during the beauty pageant’s coronation night yesterday, Oct. 3. Fans surmised that this may have been caused by the ceremony which lasted for almost seven hours.

A Twitter user, @nielsendanes, showed videos of the Cebuana beauty yesterday, falling onstage before the announcement of winners and shortly after she was crowned. During the first instance that Perez fell, she can be seen assisted back onstage by pageant host Xian Lim and fellow Miss World candidate Emmanuelle Vera. Meanwhile, another video showed her stumbling as the crown slipped from her head.

One @pcisnotinuse called out the Miss World Philippines Organization on Twitter, also yesterday. The netizen pointed out to Miss World that it should prioritize the welfare of its pageant delegates over production value.

“Our Miss World Philippines 2021 Tracy fell twice — first, prior [to] the announcement; second, while taking her walk after being [crowned]. Pagod siya/sila (She/they are tired),” he said. “I hope the organization [thinks] of the welfare of the ladies than having ‘world-class’ production.”

This is not a JOKE. Our #MissWorldPhilippines2021 Tracy fell twice – first, prior the announcement; second, while taking her walk after being crown. PAGOD siya/sila. I hope the organization think of the welfare of the ladies than having “World-Class” production. pic.twitter.com/srh6aVjM57

Another netizen, @haksfairie, meanwhile expressed concern over the incident on the same day. She blamed the pageant organization for letting the coronation ceremony run for over six hours.

She also noted that the situation should not have happened if the organization managed time and production better.

Perez is set to compete in the 70th Miss World pageant in Puerto Rico this December. JB