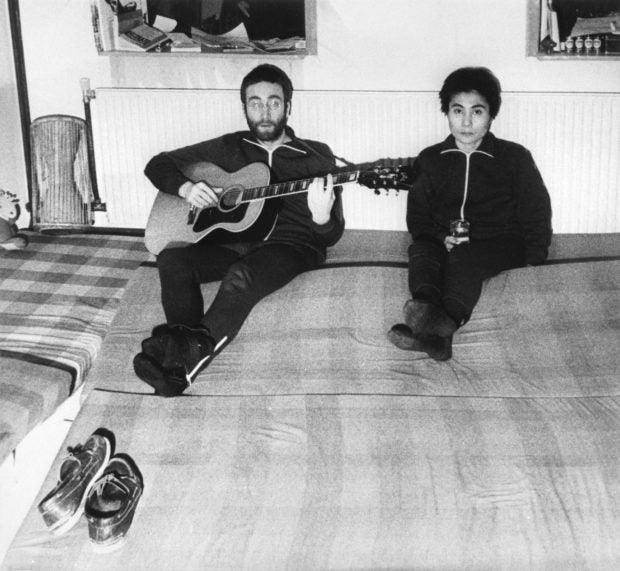 A 1970 audio recording of John Lennon singing a hitherto unpublished song during a visit to Denmark will go under the hammer in Copenhagen on Sept. 28, the auction house said Tuesday.

It has been put up for sale by four men who were teenagers when they met The Beatles singer, who was spending part of the 1969 to 1970 winter in a small town on Denmark’s west coast.

“The tape is totally unique because it’s a conversation. It took place after a press conference with the four schoolboys and some journalists, and John Lennon plays a few songs for them,” Alexa Bruun Rasmussen of the Bruun Rasmussen auction house told AFP.

“One of them, ‘Radio Peace,’ has never been published,” she said.

“It’s a little piece of Danish history and when we listen to it, we can sense that John Lennon felt cosy in Denmark. He could be left alone and just be,” she said.

At the end of December 1969, Lennon visited Denmark with Yoko Ono to spend time with Ono’s daughter from another relationship, Kyoko, who was living with her father in northern Jutland at the time.

The visit, which lasted several weeks, went largely unnoticed at first. But once his presence was discovered, the star called a press conference.

Due to a series of unforeseeable events and bad weather, the four high school students ended up interviewing Lennon after the press conference, in an informal setting.

During the interview, conducted just months before The Beatles broke up, the teens were mainly interested in Lennon’s peace activism.

“With the auction, they want to pass on the message John Lennon stood for,” Bruun Rasmussen said.

She noted the “old-fashioned” charm of the recording, which is being sold with photos of the meeting and the issue of the school newspaper featuring the interview.

“To listen to the 33 minutes of the tape you need an old-fashioned cassette player and I guess that nostalgia part will add to its value.”

Lennon was shot dead by an apparently delusional gunman, Mark David Chapman, who had earlier asked for an autograph, in New York in 1980. JB

David Bowie painting bought for $4 sold at auction for nearly $90,000