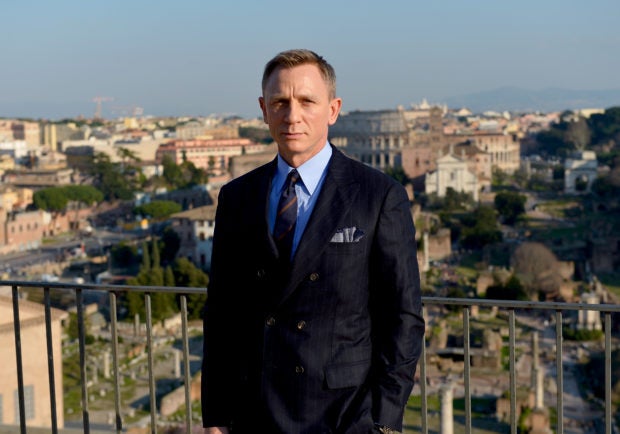 A 9-minute clip from “No Time To Die,” billed as Daniel Craig’s final 007 outing and the series’ 25th installment, showed Bond apparently awakening from an explosion in a picturesque Italian village, before launching into a series of car and motorbike chases.

Meanwhile, Warner Bros unveiled more footage from its formidable slate of new movies, including a trailer for the next Matrix sequel, now officially titled “The Matrix: Resurrections,” in which Keanu Reeves’ Neo appears confused by dreams of his past life.

Although A-listers have largely stayed away from this week’s event amid Delta variant concerns, executives from studios and theater chains have tried to draw a line under a difficult year with an upbeat message.

“I’ll cut to the chase — James Bond’s coming out in October,” MGM film chief Michael De Luca reassured movie theater bosses to loud cheers, after the film had been delayed multiple times by COVID-19 and the studio itself was sold to streaming giant Amazon.

The 007 installment is of huge importance to movie theaters this year as Hollywood hopes to entice viewers back to cinemas despite the pandemic.

“No Time To Die” picks up after 2015’s “Spectre,” with the loyalty of love interest Madeleine Swann (Lea Seydoux) now seemingly called into question.

Bond producers have insisted that future 007 films will still appear in theaters, despite the $8.45 billion takeover deal intended to boost Amazon’s streaming presence, as competition intensifies in the on-demand market.

The MGM presentation also featured footage from upcoming Ridley Scott drama “House of Gucci” starring a glittering ensemble which includes Lady Gaga and Adam Driver, as well as a new musical of “Cyrano” led by Peter Dinklage (“Game of Thrones”).

Warner Bros’ presentation Tuesday came after the studio angered many Hollywood filmmakers and movie theaters this year by releasing all of their titles simultaneously on the HBO Max streaming platform.

The studio’s executives were absent in Las Vegas this year, delivering an hour-long presentation by video.

But the package squeezed in plenty of new material, including an extended scene from upcoming sci-fi epic “Dune,” in which a harrowing rescue operation to extract a team of spice miners from one of the desert planet’s deadly giant worms goes badly wrong.

The film from Denis Villeneuve, out in October, is the latest attempt to adapt Frank Herbert’s sprawling novel for the big screen, and stars Timothee Chalamet, Rebecca Ferguson, Oscar Isaac and Javier Bardem.

A featurette presented next year’s “The Batman” starring Robert Pattinson and directed by Matt Reeves, who promised it would be “the most emotional Batman movie” yet, in which the hero is just setting out on his crime-fighting career.

An opening scene from “The Many Saints of Newark,” a feature-length prequel to “The Sopranos,” whetted appetites for fans of the acclaimed United States mob television series.

The sequence featured Christopher Moltisanti narrating from beyond the grave the story of Tony Soprano’s childhood years.

After this year’s controversy, Warner has recently entered deals to restore a “window” in which movies will be exclusive to theaters in 2022.

“Going to the theater is simply in our DNA. And that’s never going to change,” said Warner distribution chief Jeff Goldstein, admitting that some “tough and controversial choices” had been made during the pandemic.

TAGS: Batman, James Bond, No Time to Die, The Many Saints of Newark, The Matrix: Resurrections