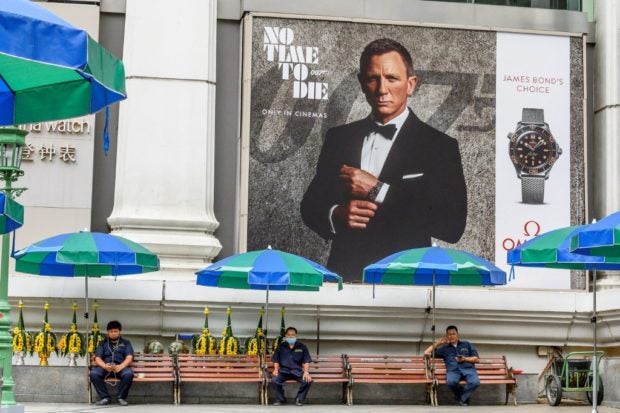 Security guards sit in the Erawan Shrine compound under an advertisement poster featuring Daniel Craig in the new James Bond movie “No Time to Die” in Bangkok on Sept. 28, 2020. Image: AFP/Mladen Antonov

Much-delayed James Bond movie “No Time To Die” will finally get its world premiere in London next month, the makers of the franchise announced on Friday.

The 25th installment of the fictional British spy saga has seen its release postponed several times due to the pandemic.

It was originally set for a London premiere last March, ahead of a global rollout the following month, before that was pushed back by subsequent waves of coronavirus around the world.

In January, American film studio MGM said the film would be released globally on Oct. 8.

“No Time to Die,” directed by Cary Joji Fukunaga (“Beasts of No Nation,” “True Detective”) is expected to be Craig’s last outing as the suave British spy, after starring in four previous films.

It sees Bond drawn out of retirement in Jamaica by his old friend and CIA agent Felix Leiter.

Produced at a rumored cost of around $250 million, the film’s success is crucial for MGM, while Universal Pictures will distribute the film overseas. JB

New James Bond movie release to go ahead in September