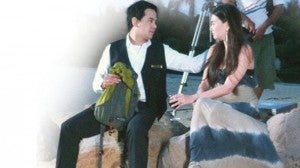 JOHN Lloyd Cruz, left, was friendly with everyone, John D. Lazatin says, “and Angel was always with her gay best friend Katti.”

John D. Lazatin, director of “What I Did For Love,” has denied the rumor that romance bloomed between actors John Lloyd Cruz and Angelica Panganiban while filming in Vietnam for the ABS-CBN omnibus production.

The rumor started shortly after Panganiban’s boyfriend, Derek Ramsey, admitted that he and the actress were going through a rough patch in their relationship. This was fueled by a press statement released recently by Cruz’s girlfriend, Shaina Magdayao, announcing that they had called it quits.

“That’s a funny rumor,” Lazatin told Inquirer Entertainment. “I never saw John Lloyd make a move on Angel (Panganiban’s nickname) while we were in Vietnam. He was friendly with everyone. Angel was always with her gay best friend Katti.”

Once filming was done for the day, Lazatin added, the team, not just Cruz and Panganiban, would check out the bars in Hanoi, where they stayed for a week in April.

He noted, however, that Panganiban was sad about having to work during the Holy Week. “Angel said she and Derek would usually go on a vacation at that time.”

Ramsay, for his part, posted this message on his Twitter account: “Guys, please don’t believe any of the rumors about Angel and John Lloyd. They did scenes for a movie and that’s it. That’s the truth.” Magdayao, in her own way, denied that Panganiban was the reason she broke up with Cruz. The actress said: “The reason is [strictly] between John Lloyd and myself.”

Lazatin said shoot in Hanoi was only one of many important parts of the film. “It’s there that the characters of John Lloyd and Angelica meet.”

“What I Did For Love” is a romantic-comedy that delves into the many aspects of love as shown through different stories involving different characters, many of whom are shown to be connected to each other as the film progresses. The omnibus film also features Bea Alonzo, Diether Ocampo,

“It’s like I’m doing multiple movies at the same time,” Lazatin said. “Another challenge here is making 10 big stars work together. They’re all busy with their respective shows. Their schedules drive me crazy. I hope to give them equal exposure in this film.”

The US-based director shared: “When this project was first offered to me, the first question I asked was ‘why me?’ I couldn’t say no to Mr. M. (Johnny Manahan), who even took time to call me and discuss this with me.” Manahan cofounded Star Magic with Freddie M. Garcia. The film marks the beginning of a year-long celebration of the Kapamilya talent management group’s 20th anniversary.

After having directed a number of TV shows for ABS-CBN, Lazatin debuted as a film director in 2000 with “Forevermore,” starring Jericho Rosales and Kristine Hermosa. In 2004, he directed one story in the three-part movie “Bcuz of U.” His last film, the drama “A Mother’s Story,” featuring Pokwang, was released in January 2012.

“I was thrilled with the positive reaction of people to my last project. I didn’t expect to land on something this big,” Lazatin said. “I have to make things happen, while shuttling to and from San Francisco in California, where I now live. The pressure is on!”