WATCH: Kim Molina belts it out with Aegis in ‘Rak of Aegis’ online concert 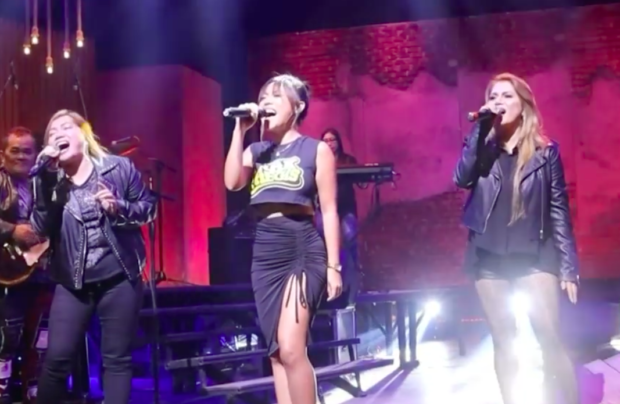 “Rak of Aegis” star Kim Molina has ticked one more thing off her bucket list as she got to sing with Aegis itself during an online concert earlier this week.

“So this happened last night on a pre-recorded one night only, online concert ‘#RakWithAegis,'” Molina posted on Instagram Monday, Aug. 9, sharing the clip of her performance with the OPM icons.

“Maraming salamat sa lahat mahal kong (Thank you very much for everything my beloved) PETA (Philippine Educational Theater Association) Theater family, and for making this possible!” she added.

Molina, who plays the lead role of Aileen in the theater musical, got to belt it out with Aegis vocalists Juliet and Mercy Sunot through Aegis hit “Sayang na Sayang,” as seen in the clip.

Aegis also gave the actress-singer the opportunity to take the lead throughout the song, treating fans to Molina’s seemingly effortless and powerful singing.

The “Rak of Aegis” online concert will hold its two encore shows on Aug. 14 and 15. Those interested in catching the show can grab their tickets via Ticket2Me.net.  /ra