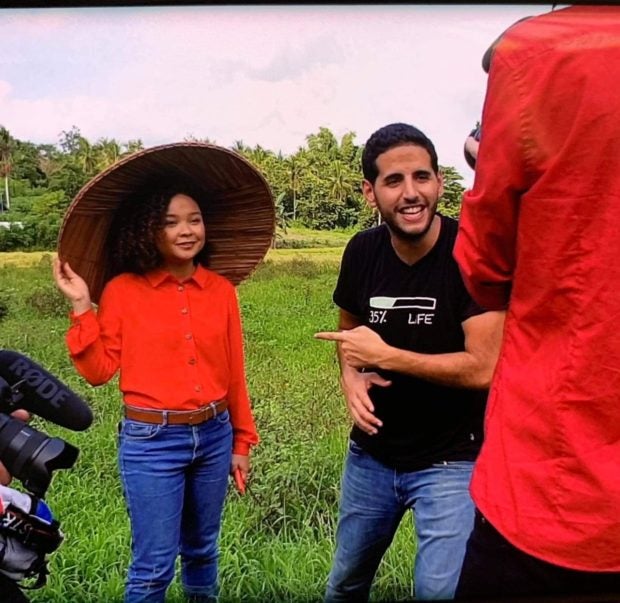 MANILA, Philippines — Popular vlogging site Nas Daily, which prides itself as “a force for good,” has again been at the receiving end of a nasty social discourse after a young Filipina chef and entrepreneur shared her “disappointing” experience with the vlogger during a visit to her hometown in San Fernando, Camarines Sur in 2019.

Still reeling from the controversy involving national artist and tattoo master Apo Whang-Od, Arab-Israeli vlogger Nuseir Yassin, who maintains the site as well as the Facebook page Nas Daily, was forced to retaliate online after a claim by Louise de Guzman Mabulo, founder of The Cacao Project that the content creator had mocked the local language and accent and event said that it “sounded stupid.”

“I’ve held my silence for 2 years, however in light of recent news, it’s high time I break it,” Mabulo, 22, said in a Facebook post on Thursday.

According to Mabulo, Yassin and his team contacted and later on flew to her town to cover her story about The Cacao Project, which supposedly aimed to give farmers cacao seedlings and short-term crops to grow while also giving them a fair wage, resources, and training.

I’ve held my silence for 2 years, however in light of recent news, it’s high time I break it.In 2019, Nas Daily had…

Mabulo claimed her family took Yassin and other content creators as welcome guests. “However, in so little time, I was disappointed to learn that the man I’d looked up to for years was not the bearer of good news he’d misled his followers to believe he was,” she said.

“I watched him imitate and mock the local accent and language, vocalizing Tagalog-sounding syllabic phrases saying it sounded stupid. He repeatedly said that the people of my hometown are ‘poor,’ ‘Farmers are so poor!’ ‘Why are Filipinos so poor?’” Mabulo narrated.

According to Mabulo, Yassin said no one wants to hear about farmers or farms and that they are not viewable content.

“He didn’t care about making the change or shedding light on real issues— he only wanted content, a good, easy story to tell that would get him more Filipino views.”

“He even joked at the start of the day that all he needed was to put ‘Philippines’ in the title, and he’d rack in millions of views and the comments would come flooding with brainless ‘Pinoy pride’ comments,” she added.

Mabulo said Yassin eventually blamed his lack of “presentable click-worthy content” on her and that everything he saw is “not clickable or viewable.”

However, the young chef noted that she was fully transparent on her phone call with Yassin that she did not think that her work would be something he would be able to visualize and that there are too many factors on her work that “couldn’t possibly be covered in under a minute.”

“I should have known better, that this man was exploitative and fueling a neocolonialist narrative using our need for foreign validation. I’ve stayed silent because I knew that I would face backlash for calling out on this man— after all, it’s easy to take Nusseir’s word over mine,” she said.

Mabulo shared that Yassin assumed in his story that she had replaced coconuts with cacao, which she called “unrealistic and absurd” and is not the goal of her venture, which is to diversify income streams for farmers. They then mutually agreed it was best that he should just leave.

A few hours after Mabulo posted on Facebook, Yassin responded, saying he can’t let her share “falsehoods” on the internet for free.

Addressing Mabulo, the vlogger claimed her story so inspired him that he even flew from Singapore to the Philippines just to “support” her.

Dear Louise,I have also kept my silence for 2 years out of respect to you. But I can't let you share falsehoods on the…

“To my biggest sadness and surprise, your story was not true on the ground. Once we arrived at your plantation, once we saw the village and talked to the farmers, we came to the conclusion that there is no story here. That the awards on the Internet are just that… awards,” he said.

“Our investigation has made it clear that your story in the media is false. And that there are no ‘200 farmers’ that you work with, and there are no cacao plantations that you don’t personally profit from,” he added.

Yassin said his team had to pack up and leave because he will never put “fake news” on Nas Daily.

In response, Mabulo made another post which read: “Our farmers are well and real, and are either blissfully unaware of you or enjoying this exchange over a cup of hot chocolate or coconut water. I will not take advice nor criticism, especially when you clearly don’t understand Filipino farming and culture, or refuse to.”

Nas, I didn’t want to validate your post with a response, but I’m not sorry to say we’re doing well, and launching our…

The controversy on Yassin started when he took down the online course featuring  Whang-Od after her grandniece called it for being a “scam.” Gracia Palicas, the tattoo artist’s granddaughter, said Whang-Od did not sign any contract with Nas Daily to do the said workshops.

However, the content creator claims that the online course is real and that he received approval from the “mambabatok” and her family.

For Mabulo, people like Yassin are the “new wave of colonialism in today’s world.”

“Filipinos should stand together on this— We are not content to be exploited. We are not a culture to be capitalized on. We are not people to be romanticized. Or poverty to set the scene for ‘Benevolent Saviors.’ We are more than what the world thinks of us,” she stressed.

“Let’s put our own forward instead, Filipinos have the ability to make our country great if we set aside our differences, refuse exploitation like this, and work in the interest of the Philippines and the Filipino,” she concluded.