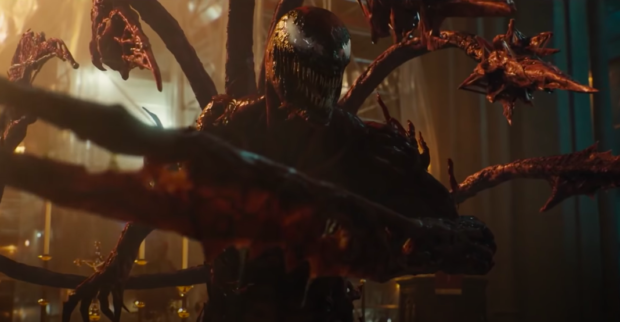 The new trailer for “Venom: Let There Be Carnage” has given the red symbiote more screentime, showing off Woody Harrelson’s take on the sinister character.

The new trailer for the much-awaited “Venom” sequel also treats fans to more fun banter between Tom Hardy’s Eddie Brock and his symbiote, Venom, who still has a knack for eating people.

“Eddie… we should be out there, snacking on bad guys!” Venom tells Brock in the trailer released online yesterday, Aug. 2.

The trailer might also have shown just how Harrelson’s serial killer character gets his Carnage symbiote, which is by biting Brock’s hand while the journalist is conducting an interview with him.

Kasady can be seen with Brock’s blood in his mouth after the bite in one scene, while another one shows Kasady seemingly getting executed via lethal injection but is able to break free as Carnage takes over.

The terrifying red symbiote can be seen wreaking havoc inside what appears to be a prison in some scenes and even sticking his tongue inside the mouth of one guard in another.

Venom, meanwhile, appears to be quite wary of the Carnage as he immediately hides inside Brock after exclaiming, “it’s a red one!”

The fan-favorite symbiote immediately gets back in the fight, however, after Brock promised to let him “eat everybody.”

Sony also introduced the new character Shriek, played by Naomie Harris, who has sonic scream powers that were also showcased in the trailer. In the comics, Shriek is Kasady’s girlfriend.

Before settling with a Sept. 24 release date, Venom and Carnage were originally expected to go toe to toe back in October 2020, but the film’s release was moved a couple of times due to the COVID-19 pandemic.  /ra