Sharon Cuneta back in Manila, under quarantine after US vacation | Inquirer Entertainment
Close
menu
search 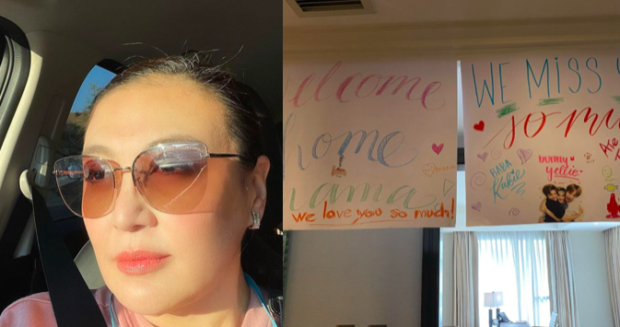 Sharon Cuneta returns to the Philippines after her vacation in the United States. Image: Instagram/@reallysharoncuneta

Sharon Cuneta has returned to the Philippines and is currently under quarantine after staying in the United States for a few months.

“Arrived back home in Manila very quietly at [four] something in the morning on Aug. 1. Am now in my 10-day quarantine,” the Megastar said on her Instagram page today, Aug. 3. She will be staying in the same building as her home, but in a wing where hotels are located.

The actress’s announcement was accompanied by photos of flowers from her husband Kiko Pangilinan and welcome banners made by her children.

(The items in these pictures were what welcomed me when I entered my hotel room from the airport. They really made my heart happy.)

While Cuneta is happy to be back in Manila, she admitted she is “going through so much” and asked for prayers from fans.

“Kahit talaga anong tino ng pamumuhay mo, magkakaroon ka pa rin ng problema (No matter how good you live your life, you will still have problems),” she said. “Pero mabait ang Panginoon (But God is good) and He has never let me down, and so I have lifted everything up to Him and I trust in Him completely.”

The actress assured fans that she will get back to work “soon,” and expressed excitement over her upcoming film “Revirginized.”

Cuneta flew to Los Angeles, California last May to “breathe and collect” herself, as a “false positive” COVID-19 test also cost her a missed opportunity to star in a project produced by Steven Spielberg. She described her stay in the U.S. as a “big deal” since she was able to live normally as a regular person abroad. JB