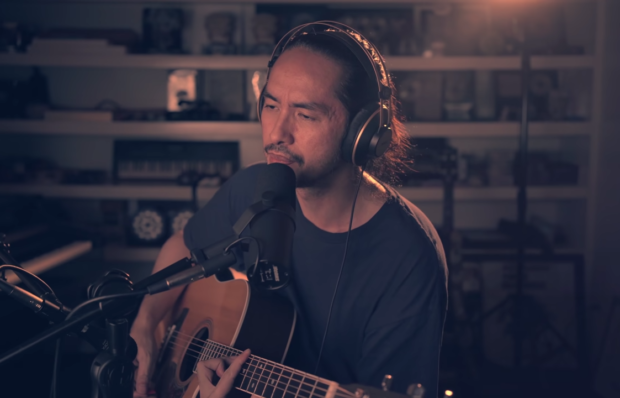 The weightlifter made history after besting China’s world record holder Liao Quiyun in the Tokyo Olympics last Monday, July 26. She ended the Philippines’ drought for a gold medal by lifting a total of 224 kilograms in the women’s 55 kilograms weightlifting competition.

The former Rivermaya frontman sung his solo acoustic version of “Alab Ng Puso” at a studio and dedicated it to Diaz. He also thanked the Olympian for being an inspiration to him, as shown on his YouTube channel yesterday, July 27.

“Gumising ako kanina at hindi parin makapaniwala na may Olympic gold medal na ang Pilipinas,” the singer said. (I woke up earlier and still could not believe that the Philippines now has an Olympic gold medal.)

Blanco shared that his love for sports is equal to his love for music, “sometimes even more.” He then recalled that as a child, he wondered when the time would come for the Philippines to meet such a milestone.

(Since I was a kid, I thought about when the time would come, and yesterday it did. On Sgt. Hidilyn Diaz’s shoulders, she carried the dreams of all Filipinos like me.)

Blanco said he was inspired by Diaz’s achievement, and the re-recording was his way of thanking the Olympian.

“Hindi ko mapigil ang pag-apaw ng inspirasyon mula sa kanya at nais kong magpasalamat lamang kaya’t agad-agad kong ginawa at inaalay sa kanya ang recording na ito,” the singer said. (I couldn’t stop the overwhelming inspiration I got from her and I wanted to say thank you, so I immediately recorded and dedicated this song to her.)

Diaz is the second Filipino athlete to win multiple Olympic medals, joining swimmer Teofilo Yldefonso who won bronze in the men’s 200-meter breaststroke in 1928 and 1932. Her victory has been celebrated by personalities from all over the globe, including local celebrities and the American pop band LANY.