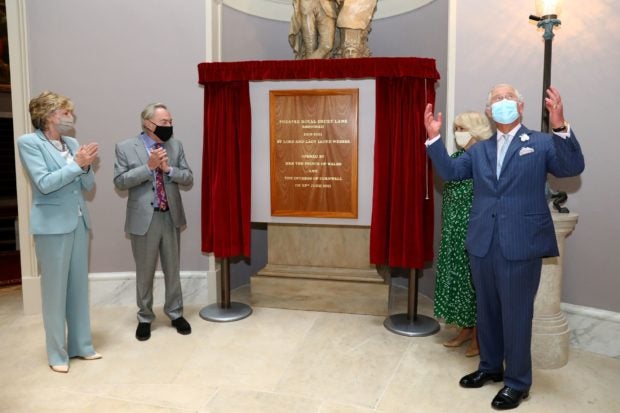 Britain’s Prince Charles and Camilla, Duchess of Cornwall, stand next to Lord Andrew Lloyd Webber and Lady Madeleine Lloyd Webber as they unveil a plaque to commemorate their visit to Theatre Royal in London, Britain June 23, 2021. Image: Reuters/Tim P. Whitby/pool

The theater, known as The Lane, boasts a revamped auditorium, swanky staircases, a champagne bar inspired by the Pantheon in Rome, an all-day dining area as well as a cocktail bar named after society photographer Cecil Beaton.

Composer Lloyd Webber, a veteran of London’s West End, bought the theater in 2019 and embarked on the 60-million-pounds ($82-million) restoration project, aimed at honoring the building’s history, with his wife Madeleine.

Situated in London’s Covent Garden, the venue is described as “the oldest theater site in continuous use in the world,” active since the 17th century.

“The task of restoring the Theatre Royal was threefold. How to reinstate (architect Benjamin Dean) Wyatt’s glorious ‘front of house’ rooms, how to fix the 1922 auditorium and, third, how to make this extraordinary building a versatile, vibrant heart of the artistic soul of Covent Garden,” Lloyd Webber said in a statement.

“The restoration of the Theatre Royal, uniting my two great passions of theater and architecture, has been a colossal task rendered very difficult by the [COVID-19] pandemic. It simply would have ground to a halt without the dedication of our extraordinary craftsmen and the team overseeing the project in, at times, almost impossible circumstances.”

Prince Charles and his wife Camilla officially opened the theater last month. Its ground floor opens to the public on Friday while “Frozen The Musical” is scheduled to open at the theater in late August.

Separately on Friday, Lloyd Webber, the man behind musicals like “The Phantom of the Opera” and “Cats,” said his new London production “Cinderella” would open on Aug. 18 after being postponed from earlier this week.

The composer canceled Tuesday’s official opening, following nearly a month of previews, after a cast member tested positive for COVID-19. The rules around self-isolation for the rest of the cast, who all tested negative, meant the musical could not open as planned that day. JB