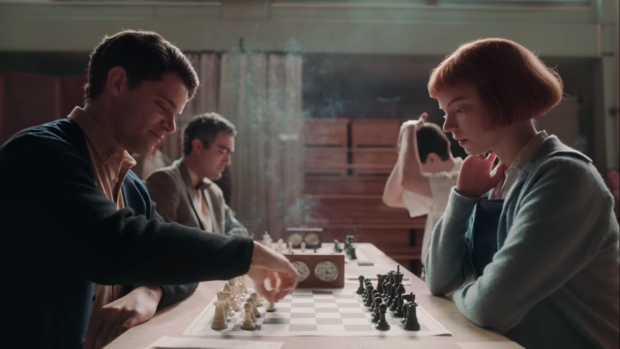 LOS ANGELES — “The Queen’s Gambit,” the story of a chess prodigy that was a streaming smash for Netflix, may become a musical.

“The Queen’s Gambit” centers on Beth Harmon, an orphan who discovers she has a preternatural ability to move the pieces around a chess board and dominate the competition. The novel, published in 1983, follows her journey from Kentucky to Paris to Moscow, while she battles addiction and the prejudices of a male-centered world. Now, that journey will involve music, dance and singing, in addition to pawns and rooks.

“It is a privilege for Level Forward to lead the charge of bringing ‘The Queen’s Gambit’ to the stage through the beloved and enduring craft of musical theater,” said Level Forward CEO Adrienne Becker and producer Julia Dunetz.

“Told through a brave and fresh point of view, audiences are already sharing in the friendship and fortitude of the story’s inspiring women who energize and sustain Beth Harmon’s journey and ultimate triumph. The story is a siren call amidst our contemporary struggles for gender and racial equity, and we’re looking forward to moving the project forward.”

Level Forward was founded in 2018 and has produced and financed such feature films as “The Assistant” and the documentary “On The Record.” Its stage credits include “Oklahoma!,” “What The Constitution Means To Me,” and “Slave Play.” Abigail Disney, a grandniece of Walt Disney, is one of the company’s founders.

Level Forward did not announce any key creative talent associated with the planned musical of “The Queen’s Gambit.” JB