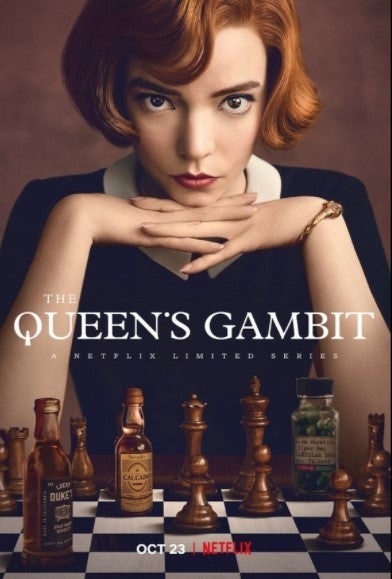 “The Queen’s Gambit” has proved a hit since the seven-episode miniseries was released on Netflix, Oct. 23. Image: Netflix via AFP Relaxnews.

After setting a record in its first month on the air, “The Queen’s Gambit” has undoubtedly taken over the streaming world by storm.

The previous record, set at 27 days, was held by “Tiger King,” according to a report by Forbes on Nov. 14.

“The Queen’s Gambit,” based on the 1983 novel of the same name penned by Walter Tevis, was released on Oct. 23.

“The Queen’s Gambit” tells the story of orphan chess prodigy Beth Harmon, who is played by Anya Taylor-Joy in the show set in the 1950s to 1960s. Harmon attempts to claim the title of World Champion while dealing with addiction to tranquilizers and alcohol, and her troubled past.

Since its release, the show has made it to the Top 10 of 92 countries while it ranked number one in 63, according to the streaming platform.

Due to the show’s growing fame, it has also inspired interest both in the classic board game and the book it was based on.

The said novel has entered the bestseller list of The New York Times 37 years after its release while Google searches for “How to play chess” have hit a nine-year peak. JB

Read Next
Nora Aunor receives lifetime achievement award from Gawad Amerika
EDITORS' PICK
New Year, New Rediscoveries
More than 150 National Guard in Washington for Biden inauguration test positive for coronavirus
Is your company a growth champion? Stand up and be recognized!
Acer Philippines welcomes you to its first flagship store
PNP’s Covid-19 cases jump to 9,809; 52 new infections logged
Pope Francis to miss events due to new flare up of leg pain—Vatican
MOST READ
Ellen DeGeneres, too, is baffled by viral Filipino soda ad
AFP to apologize to UP alum falsely included in list of NPA members — Lorenzana
Why Kris Aquino sleeps with her pearls
Hurt and heartbroken McGregor ponders future after knockout shock
Follow @IBiongINQ on Twitter
Don't miss out on the latest news and information.