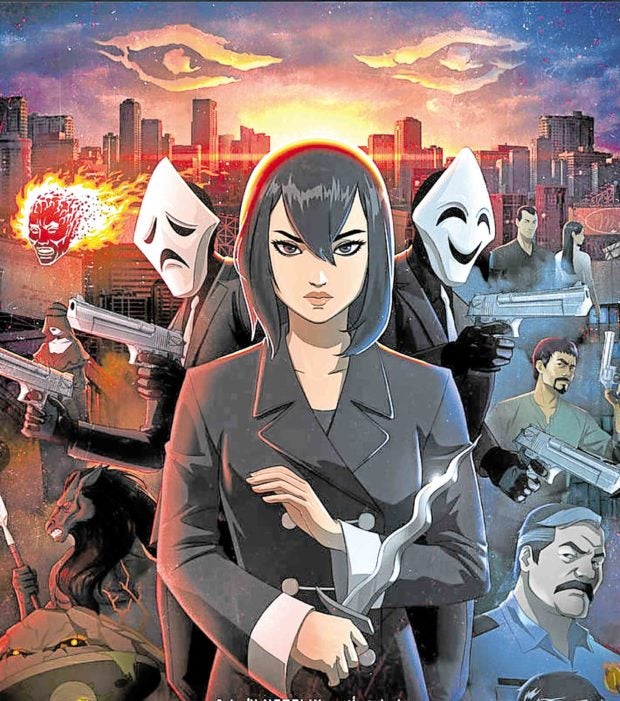 On a gray and overcast weekend, I hunkered down in bed excited to start binging a brand-new animated series on Netflix: “Trese.”

After previous binges of shows such as “Castlevania” and “Beastars,” I had a feeling this one would be right up my alley—not to mention that this is uniquely Filipino, being based on the komik by Budjette Tan and KaJO Baldisimo.

Much of the crew of “Trese” is also Filipino, Fil-American or Fil-Canadian: Tanya Yuson serves as executive producer (along with her producing partner Shanty Harmayn); showrunner is Jay Oliva; and writers are Zig Marasigan, Mihk Vergara and Tanya Yuson.

Both the English and Filipino versions are rounded out by some of the best voice actors in the business.

The pilot episode begins with the MRT breaking down, an experience familiar to many of Manila’s denizens. However, what ensues is the stuff of horror movies: a group of aswang hunts a few of these passengers down, kills and devours them.

We then meet Alexandra and her two bodyguards, twins Basilio and Crispin (voiced in the English version by Griffin Puatu, and in the Filipino version by Simon dela Cruz), and police chief Captain Guerrero (voiced in English by Matthew Yang King and in Filipino by Apollo Abraham).

We are then introduced to other supernaturals, among them a nuno sa punso, a duwende, tikbalangs, and the God of War in the form of Datu Talagbusao. Alex is also haunted by the memory of her father, Anton (voiced in English by Carlos Alazraqui, who voices many other characters in the series, and in Filipino by Eugene Adalia).

The locations for “Trese” are not limited to the city of Manila, but extends to parts of Metro Manila (without spoilers, there are buildings you will immediately recognize … I pointed a particularly familiar one to Nicole when we watched one episode together, and she let out a long “wow” once I did), which added to the nostalgia and familiarity.

6-hour bingeThis binge would last a total of six hours, as I was going to watch “Trese” in Filipino first, then in English. There’s something I noticed watching how the Filipino language is used, not only for communication, but also for character.

The supernatural creatures seemed to speak in a more poetic and elevated fashion, while the humans were more down-to-earth, employing street language, as well as Taglish. It was as if you knew who each character was, just by how he/she spoke.

For the English version, actors who could do Filipino accents were encouraged to use them and, as an added bonus, there is some Filipino that actually remains in the script (I won’t tell you where or when it happens, but it’s quite beautiful when it does).

So … my verdict? I was completely satisfied. The show is beautifully illustrated and animated, reminding me of the slick and dark 2D animation style of “Batman” and “The X-Men.” There were also a few things that seemed to pull from “Ghost in the Shell,” and I spotted one nod to the Disney original animated feature, “Mulan.”

It was also beautifully acted and nuanced, but I’ll give particular nods to Jon Jon who infused Hank with a terrific sense of humor, Griffin and Simon for gifting us with these thirst-worthy twins’ personalities, and to Shay who gave a game effort in speaking the Tagalog lines … I have faith she’ll get better with time.

It was such a thrill to see bits and pieces of our folklore introduced in such a cool way via this animated series and, on a more personal note, I found myself smiling from ear to ear hearing the voices of friends in a project we can rightfully claim as ours.

Here’s hoping for more seasons of “Trese,” bringing even more of our folklore to center stage.